Fractal Wrongness: The state of being wrong at every conceivable scale of resolution.

I may have made my thoughts on the new NUS Digital/UnionCloud-based LUSU website, brought in for the start of the 2016/17 academic year, known previously. I may have said that one day, I’ll learn to stop giving the NUS even the slightest modicum of credit, and described UnionCloud as a CMS only its mother could love. Hardly high praise.

But then I had to actually use the damn thing, in all its fractal, fractal wrongness.

Now, I won’t lie — I wasn’t involved in the development process. I don’t know just how much one is given by the NUS to work with. However, UCUM’s SU are on the same system: check it out. They were on it back at the end of last year, so perhaps these issues are just teething problems that UCUM worked out whilst I wasn’t looking. In that case, consider this a public service announcement. No names named, no beefs: just a professional suggestion (or ten).

Because frankly, this is the most superfluous button I’ve ever seen:

This article won’t be a publish & forget kinda deal either, I’ll update it every time I come across a new issue. Expect many updates. Some will be nitpicks, some will be great big security vulnerabilities, some will just be personal aesthetic quibbles. All will have gotten on my tits at least once. Without further ado:

LUSU has a quite nice shade of purple (#52237f, to be precise) to call its own. Colours that go with purple? Complementarily, yellow. Analogously, pink or dark blue. Triadically, orange and dark green. Tetradically, red, green and yellow. Do you know what all those colours have in common?

Y’know, there’s a reason achieving this kind of layout is called the Holy Grail of web design. That’s not an excuse to just leave ½ of the page blank. 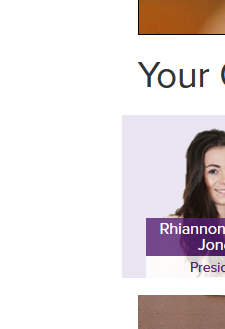 Even with that, the Your Officers bar extends beyond the boundaries of everything else. Was it intentional? Was it a mistake? There’s no way to know, for both seem as one when it comes to the LUSU website.

How well it renders on a phone 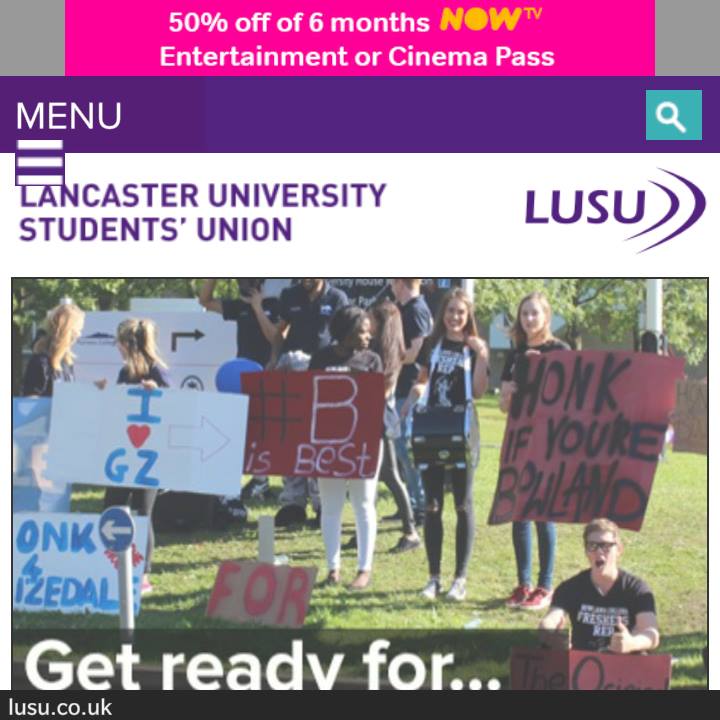 The Your Officers block 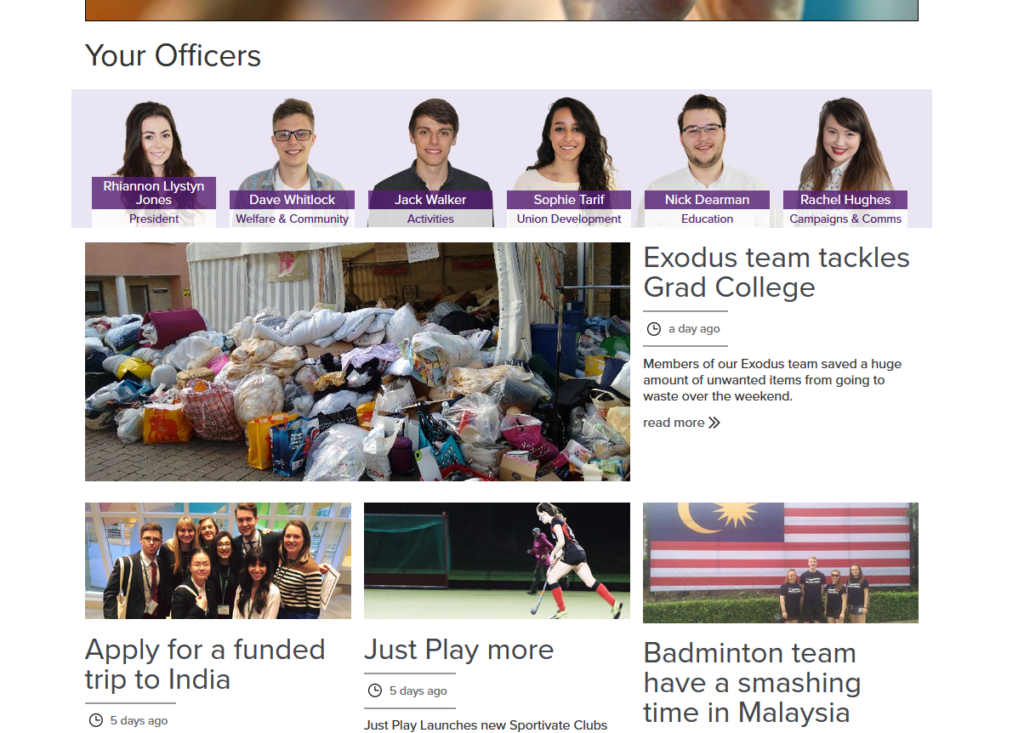 When you see a layout like that, and the highlighting of the President on the left there, what do you assume? I even did bloody training for this thing, and I still assumed clicking the other officers would restrict the articles below them to ones from their area of expertise.

The fact that Website Training is still a category

The fact that a society I’m on the exec. of is in it 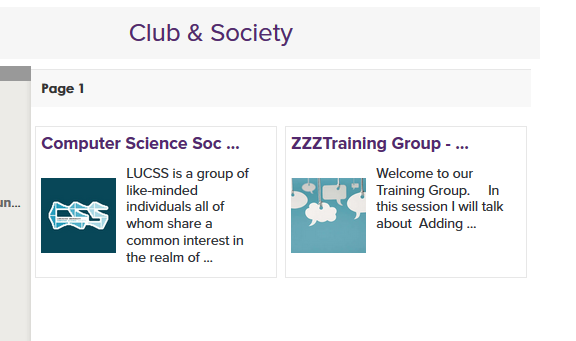 The fact that I’m still not in said society, despite emailing LUSU support about it two months sgo

In fact, let’s go back to that last picture a sec

How come I only seem to exist as a product of the sum of my society exec. memberships? Where’s the page for Ben Goldsworthy, student? I’m a human being, man!

I mean, there is a page for entering in details and a profile picture. There just doesn’t seem to be any directory of students or anything that’d make that worthwhile.

You can attach your social media accounts though!

Now you see it:

Now you (view a club or society and) don’t:

That’s not how you do infinite scrolling 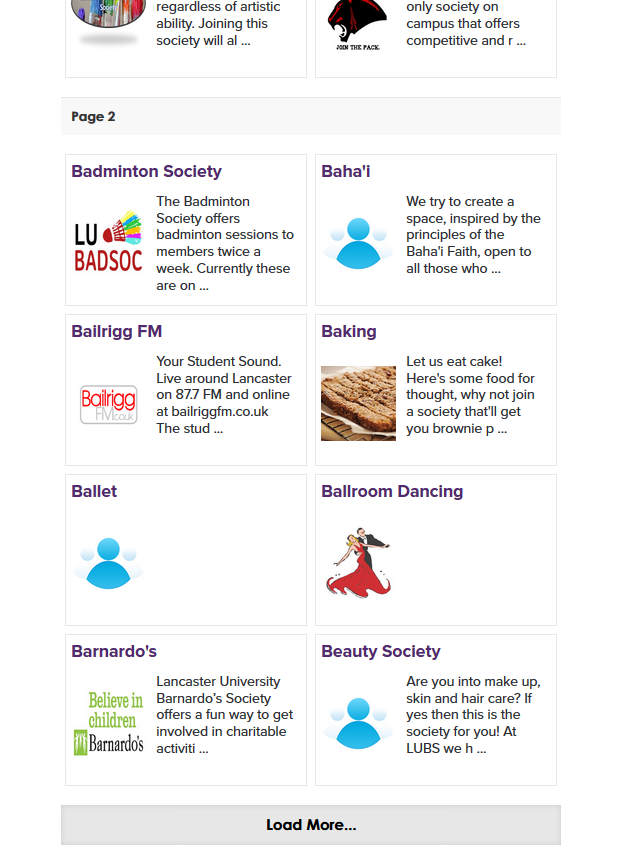 Infinite scrolling is supposed to replace indexed pages. If your Load More button

you have no benefits of either method of navigation.

The most garish, Fisher-Price CMS dashboad I’ve ever seen 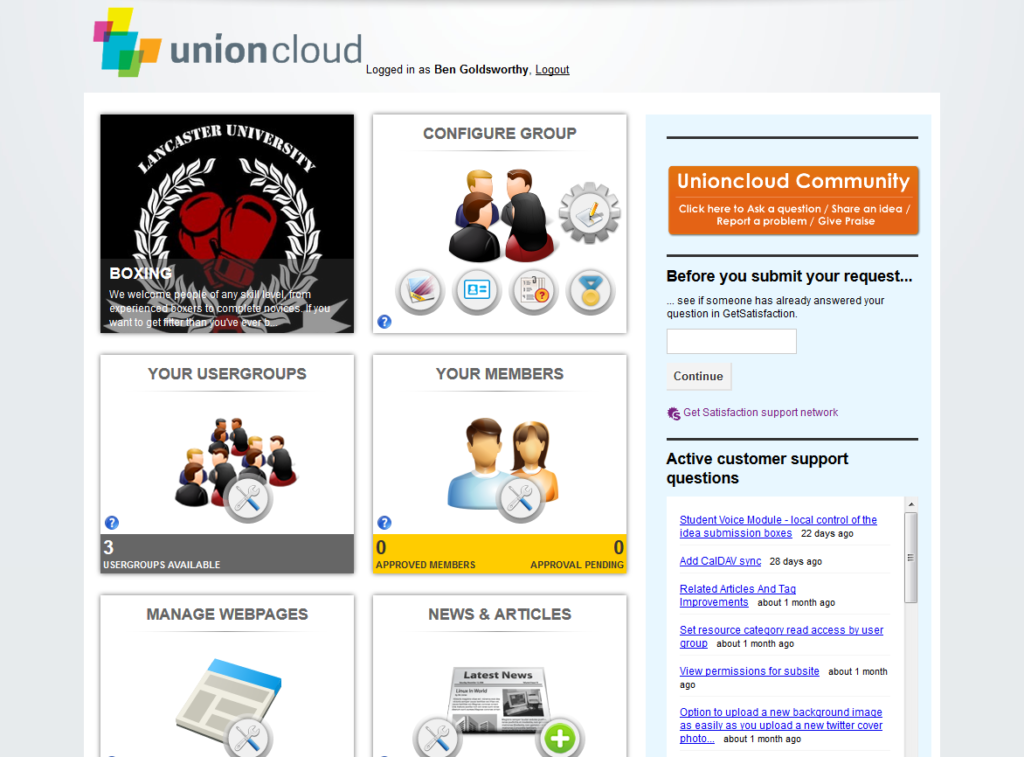 I would write exactly why this is hideous, but I’m busy throwing up in my mouth and also everywhere else.

Okay, so this is where things get a little technical (although to be fair, why are you reading me whinge about web design if you aren’t willing to slog through a bit of that?). This is the button on the society information pages: 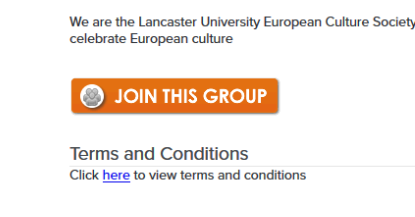 Oh shit bruv, what you doin'?

Ignoring briefly the use of a background-image for the button, the initially overlooked text-indent: -999px; caught my attention. Was someone having a giggle? I changed it to text-indent: -80px;, bringing whatever it was that was being shoved 999 pixels over to the left rightward. Lo and behold:

This is the strangest way of doing a button I’ve ever seen, but it got me thinking. Another article kind of thinking. 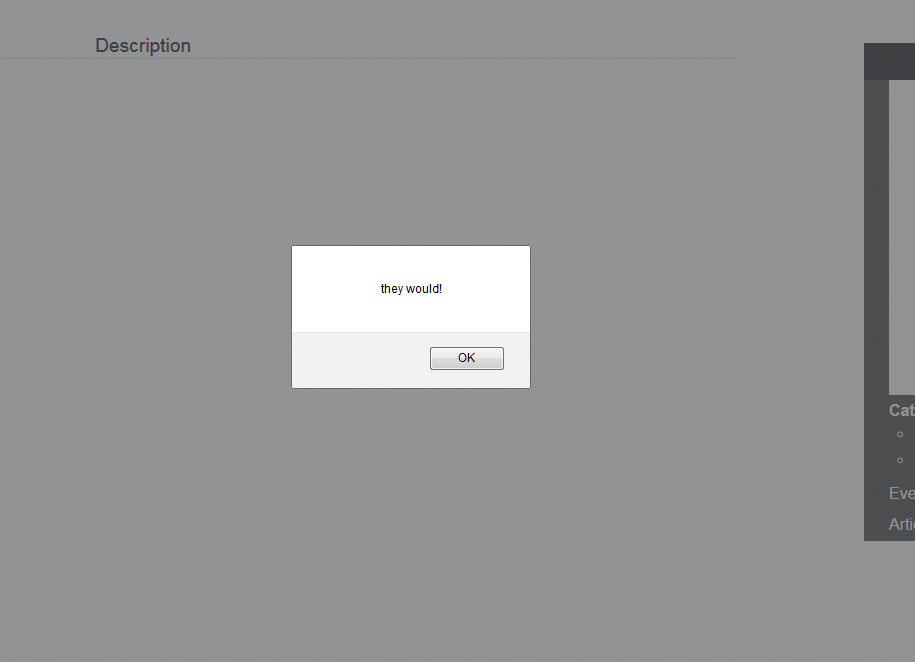 As the Wu-Tang Clan famously sang, XSS ain’t nothin’ to fuck with. 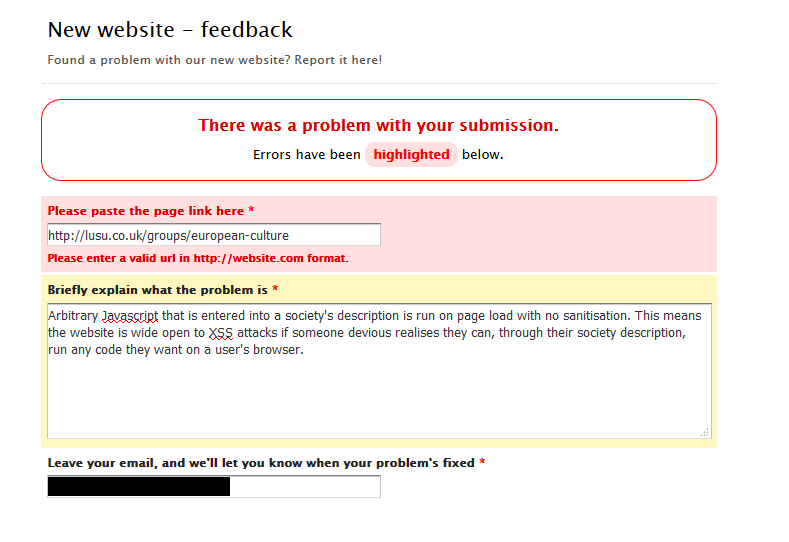 I’m just trying to tell you about how massively vulnerable your website is, why must you make it so difficult?

How long it takes to upload images 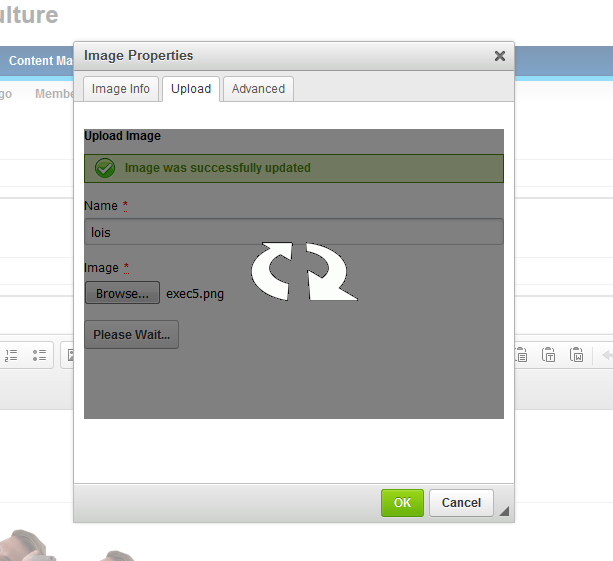 That’s not how CSS IDs work

What makes attributes of type ID special is that no two such attributes can have the same value in a conformant document, regardless of the type of the elements that carry them; whatever the document language, an ID typed attribute can be used to uniquely identify its element. 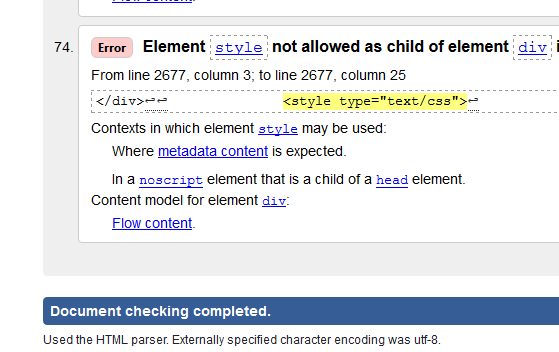 That is an actual CSS rule I had to write. Hyphenated, underscored and camelCased class names all together. It’s anarchy.

Telling me to clear my cache for no reason

Still telling me to join groups that I’m on the Exec. of 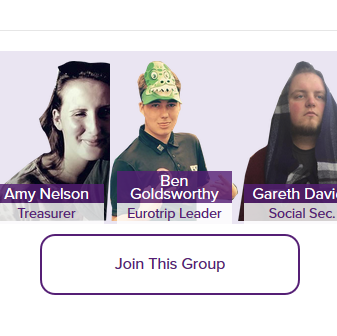 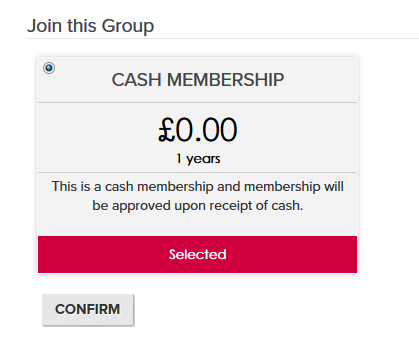 Is this really the only way of creating a free membership?

Okay, so LUECS’ is https://lusu.co.uk/groups/european-culture, which makes sense. What about LUB?

What’s the point, if no link gets added to the society page?

Every single category and every single child category, all standing between you and the Save & Approve button at the bottom. No means of collapsing the list. Let’s do this.

On the bright side, you do get some amusement as you scroll. For example, the juxtaposition of Fetish and First Aid (not to mention Darts — is someone from Pendle College behind this?):

They have one rule: clear: both;. Just stick it on an :after and clear up your HTML.

The only link to the ideas directory being through the frontpage

So you’re looking through the list of ideas and see one you feel strongly about. Intuitively, you’d probably click one of the thumbs:

Then nothing would happen, and you’d look closer, finally seeing that orange block on the bottom. Yes, you have to click that to get to the idea’s page, where you can click the thumbs to vote (or the incredibly superfluous orange text underneath works too): 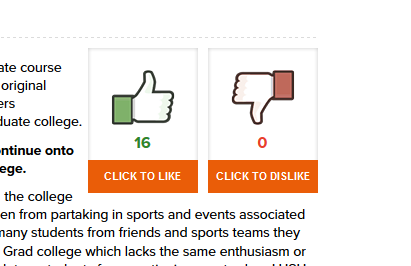 Want to know where this is particularly egregious? On the website homepage, this is what you get: 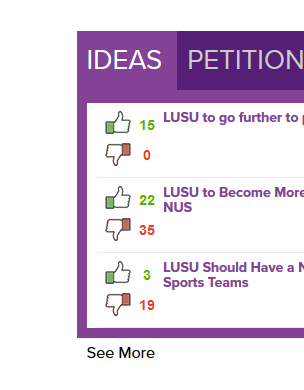 And of course, the whole block with the thumbs and the tallies for both responses is just one big link to the idea’s page. Of course.

The middle button not actually linking to anything 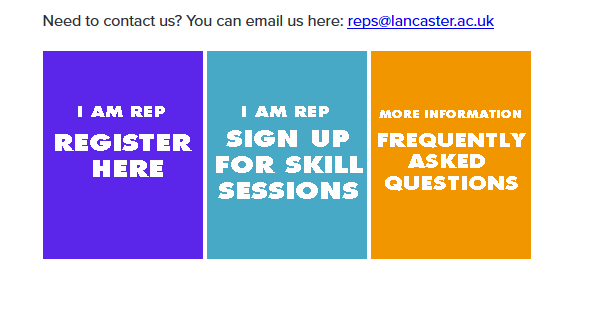 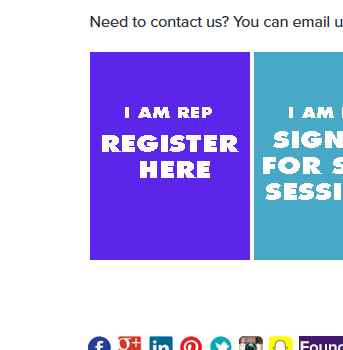 I mean, seriously? The orange is a bad clash, but at least it’s a bad clash consistently throughout the website. The turquoise too. But to stick in a different fucking shade of purple takes real balls.

The liberation officers not being listed

Maybe this is a personal beef, but I’ve had a run-in before with a liberation officer who had a peculiar interpretation of what being an elected public position should entail. Item one is that you be publicly listed as holding that position so people can contact you.

The breadcrumbs not working half the time

So this works (until you click on a society and the whole top header disappears; see earlier): 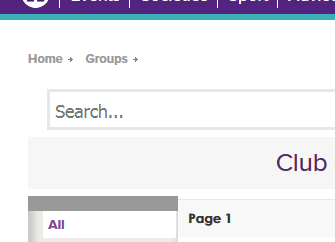 The Found a problem with the site? button from which this article derives its title looks as though it was originally suppose to be on a LUSU purple background, rather than a white one, and thus sticks out like a sore thumb.