With my sister studying design at university, I wanted to challenge her as a client with a product design brief. At the same time, I had just binged a series of lean/agile/start-up culture sacred texts (The Lean Startup, The DevOps Handbook and Lean Thinking, to name but a few) and was eager to play around with some of the concepts discussed within them. In particular, I was intrigued by the concept of the information radiator: the use of pervasive, publicly-displayed information displays in a workplace tracking various metrics with the intention of giving everyone present an immediate, at-a-glance overview of the state of whatever system they are working on. Plus, Christmas was coming up.

My brief was as follows:

A 24-hour analogue clock with a whiteboard backing (so I can plan my day out and have the clock tick through it). I don’t think this [already] exists, but I want it to. There’s this, but I think it was just the guy’s MA piece and his Web site is dead now. There’s also this [Amazon.de], but as far as I can tell it’s 12-hour which is no good. There’s this 24-hour clock, and I suppose if I can write on the clock face cover (and erase what I write) then that would work as an alternative to a dry erase backing.

My sister took that away, and the months rolled on…

Eventually, as it tends to do every year, Christmas arrived. Amidst much merriment, frivolity, sincerity and so forth, I unwrapped my sister’s gift and out came the first prototype of the Clock of the Future™: 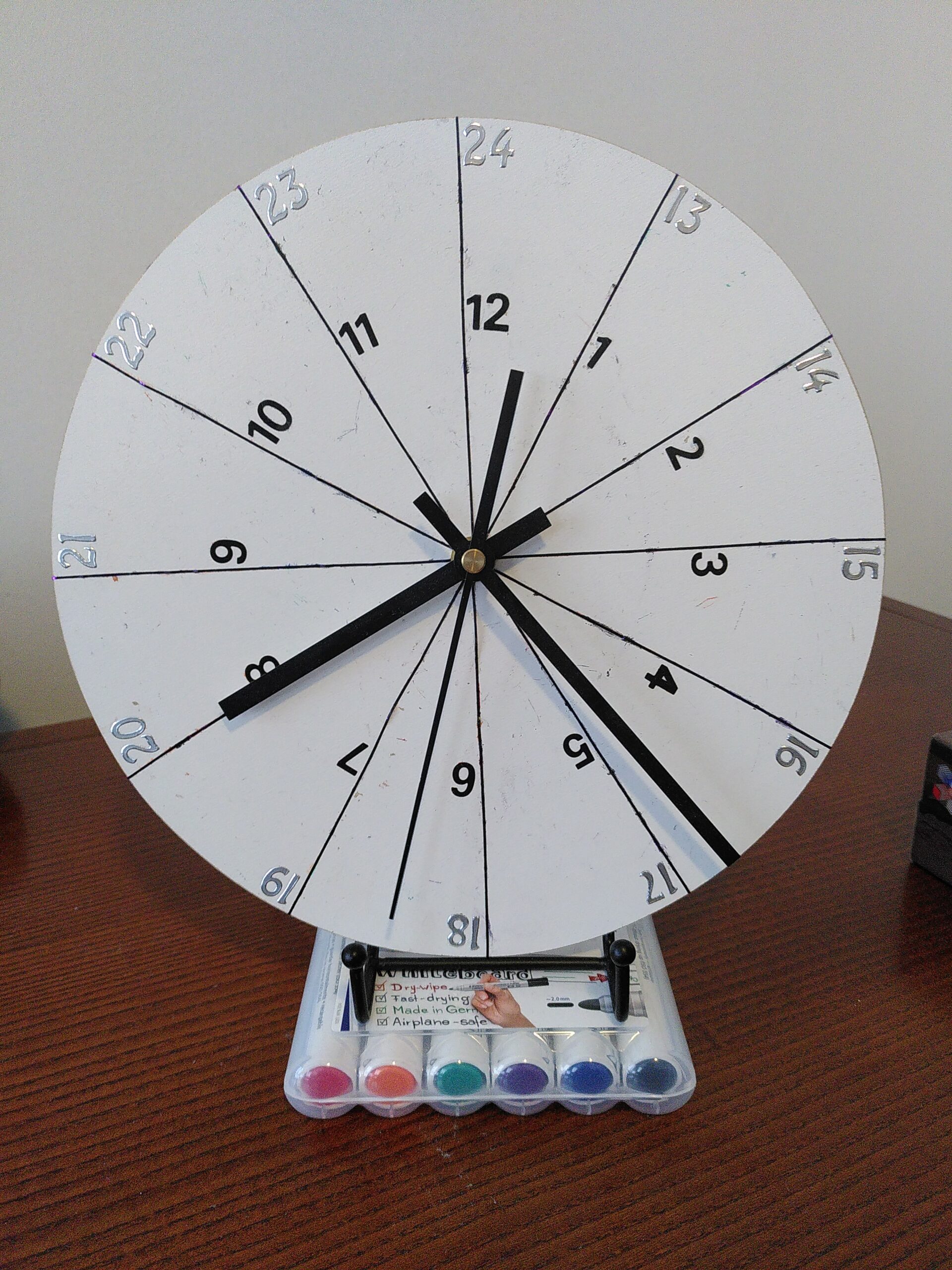 So far, I have identified three key use cases for the clock display.

Firstly, it can be used for the intended purpose of plotting out one’s day and then ticking through it:

Secondly (or, perhaps, as a focussed subset of the previous example), it can be used to complement something like the Pomodoro Technique, marking out the blocks of focus and break periods. That said, certainly for Pomodoro one should still set a timer to go off at the end of each block, as watching a silent clock would get in the way of the intended task: 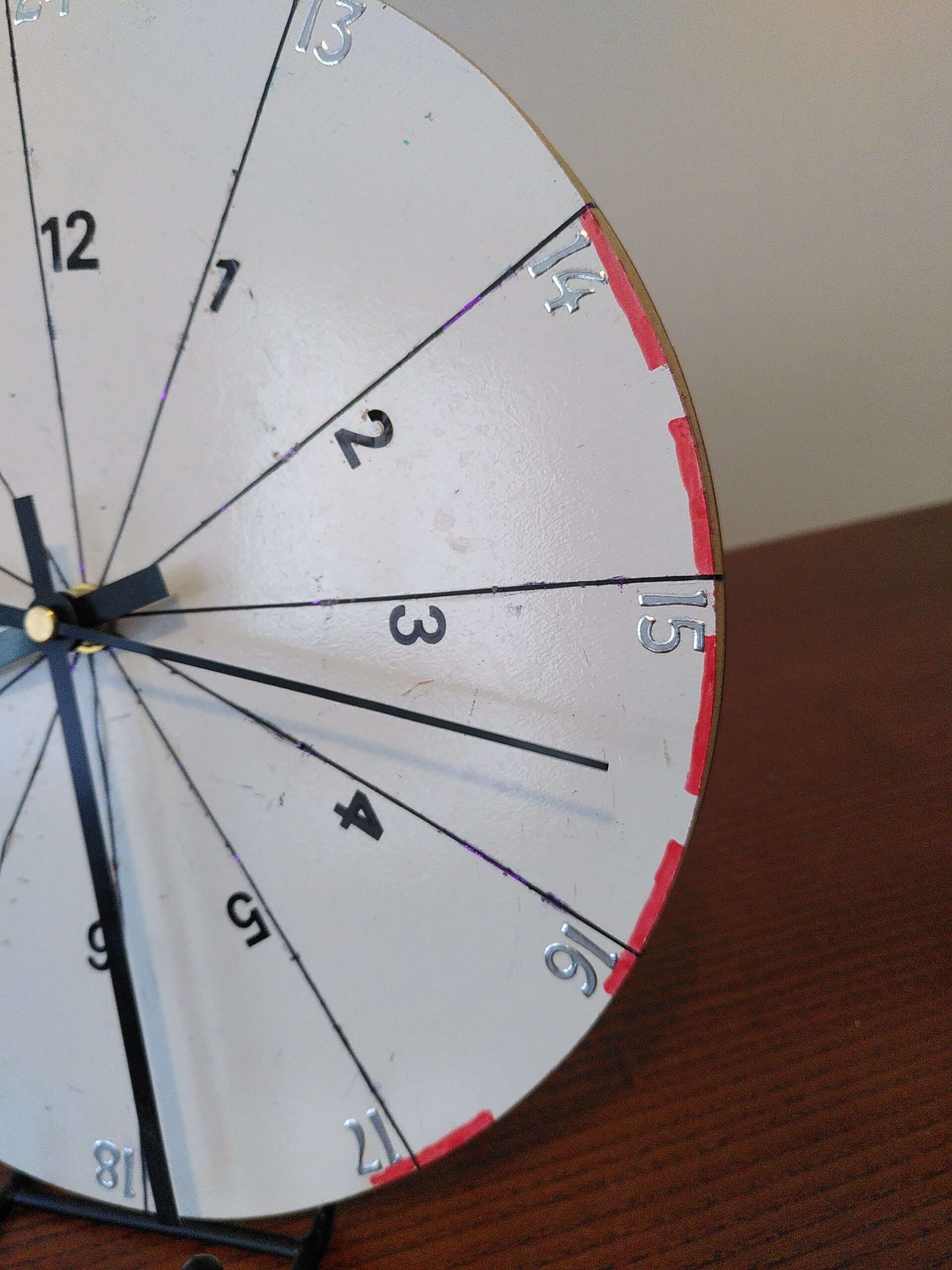 Thirdly (again, a focussed subset of the first example), it can be used to mark specific points in the day. I found this out by accident whilst attempting to fast for Ramadan, as I marked the range of sunrise and sunset times and easily could tell at a glance how far away I was from my dinner: 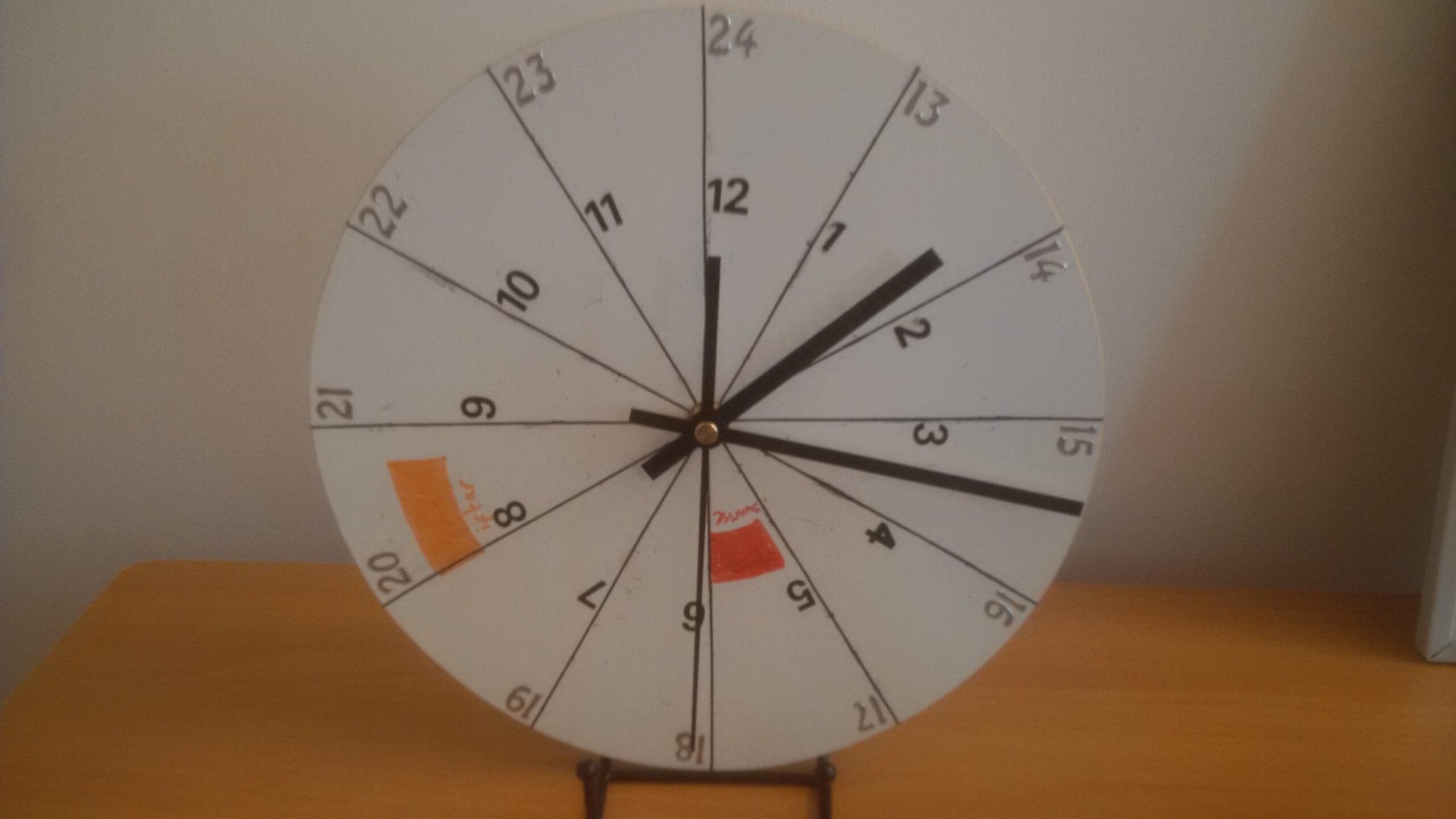 Or fourthly, it could be used simply artistically (albeit by someone with a steadier hand and more creativity than myself): 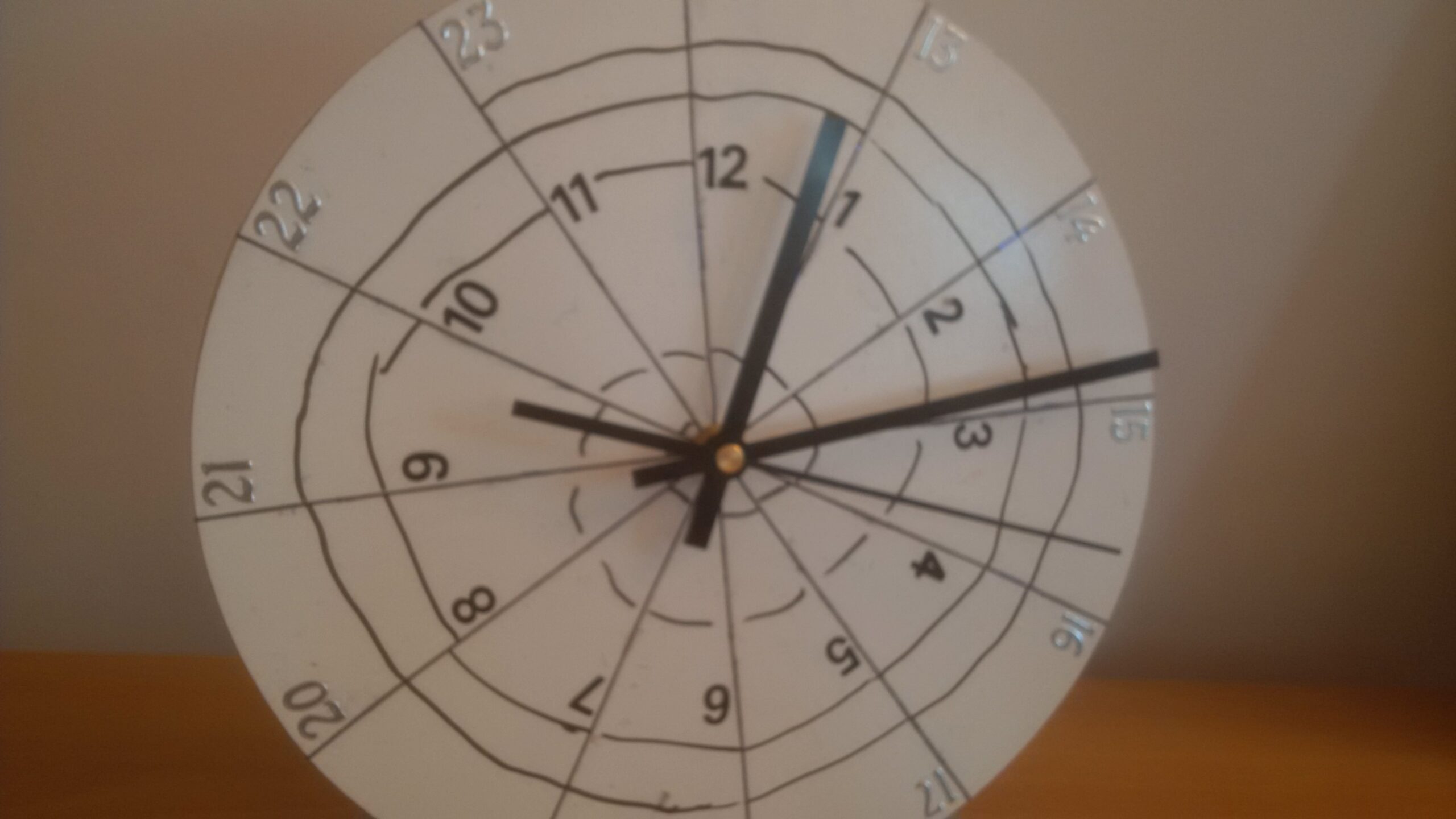 Unsurprisingly, there is not much of a market for 24-hour clock motors, so the first and most obvious job is to move to a full 24-hour clockface. However, I think this will be a reasonably simple job: I just need to add a 2× larger gear to halve the speed ratio, and then redistribute the numbers on the face appropriately.

Secondly, the face markings themselves need a rethink. The lines delineating each segment are good, but in the current model they are acrylic strips that catch the pen when drawing on the face (as you can see in the above spiral image) and are starting to come away from it. This should also be an easy fix: just mark them directly onto the face.

Thirdly, it’s a bit of a pain to actually draw on the face of the clock, as you have to either stop the clock and re-set it to the correct time afterwards, or time your strokes to the windows in which the minute hand isn’t in the way. Perhaps a solution could be to have a detachable face that can be slid out to amend? 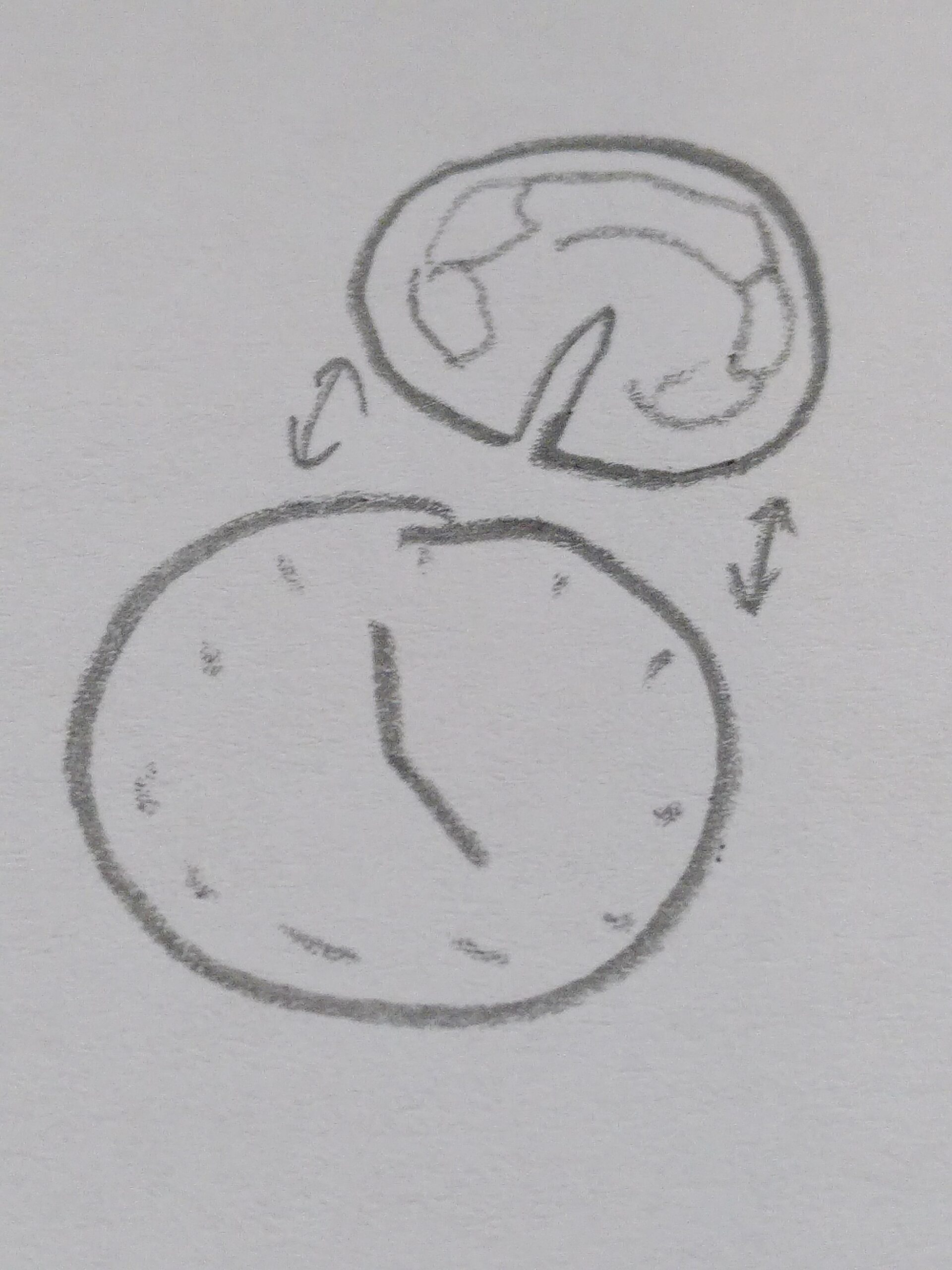 However, returning to the initial inspiration for the project, perhaps what was intended as an exploration of the information radiator concept has instead provided a valuable lesson on the value of the minimum viable product (MVP) as a means of rapidly testing the viability of an idea. That is, it’s not quite clear to me that the advantages of having a dry-erase backboard justify the time taken to overcome the obstacles of making such an approach easy to use.

Whilst it would be nice to have my schedule presented on the rear of the clock face for the hands to cycle through over the top, I think it would be far more practical just to buy a 24-hour clock with a transparent cover and draw on that.