I have drafted and binned this post a number of times already. Unsurprisingly, this usually coincides with any instance in which I am required to do anything marginally complex with Microsoft Teams, and often not even that.

I can safely say, without hyperbole, that nothing has ever been as miserable to use as Microsoft Teams. I have never encountered so obtuse, so flakey and so appallingly-designed a tool in so well-defined a problem space as Microsoft Teams. Teams’ awfulness is made all the more galling due to the fact that a) Microsoft has effectively infinite money to spend on its development and b) due to the COVID-19 pandemic forcing a worldwide dependence on tools such as this, Microsoft has leveraged its market dominance to make this piece of shit a de facto standard for most organisations.

This will not be a particularly curated post. In the spirit of previous work, this post will serve as a living repository of every mind-boggling new offence that I encounter whilst using the thing. Note also that I have no experience managing Active Directory/Azure/whatever else and am not familiar with a lot of the technological underpinnings of Microsoft’s solution suite. Maybe things are all perfectly understandable and pleasant if one has such knowledge, but even such a state of affairs would be utterly unacceptable for a piece of general-purpose consumer software such as Teams.

As for me, I desperately need the catharsis of screaming into the void.

For my sins, I currently have to juggle four separate accounts, each one assigned to a different Organisation/Tenancy. Unlike in Slack, it is not possible to connect multiple workspaces and easily switch between them; instead, if I want to shift from one to another I need to log out and log back in. That would be inconvenient on its own, but pair this with the fact that Teams occasionally gets confused and tries to log me in to the second account on the first account’s tenancy (where it obviously can’t find the user) and you have a recipe for some real fun. When this happens, it invariably requires some combination of hope, prayer and nuking my cache files to resolve, or (less reliably) I can sometimes log into the account for the tenancy it is insisting on, log back out and then log in to the first account.

And apparently it’s not possible to merge Microsoft accounts.

The worst part is that there is context-switching functionality in place, but only for a single account that is part of multiple Organisations. This is close to useless, however, as for any Organisations other than the one the account exists for only restricted guest accounts are available.

I run GNU/Linux on all of my devices, and whilst this only happened once I feel it is worth mentioning that Teams once managed to brick one of my laptops. If I recall correctly, it was something to do with it starting on system boot (which, of course, it defaults to doing) and getting into some sort of argument with my desktop environment that blocked me from getting through to the GNOME login prompt.

Logging into one of my accounts automatically redirects the login prompt to the organisational single sign-on (SSO) portal. The problem seems to have been fixed now, but for quite a while there was a 50/50 chance every time I started Teams that the SSO portal would get stuck in an endless loop and dump me back at the start every time I tried to log in. There was no error message or other indication of what was happening, but I eventually found some log entries that suggested it was VPN-related.

If that sounds like a pain in the ass, then just imagine the joy of this combined with the aforementioned tenancy-locking. More than a few times I missed meetings because Teams was a) insisting that I wanted to log in to the tenancy with the SSO portal, regardless of which account I used and then b) also refusing me to log into that account because it was stuck in a loop.

The Garden of Branching Paths

This is actually the situation that brought me back to write this piece in full and publish it, and is responsible for eating up a sizeable portion of my Sunday morning. This is probably the single worst UX experience I have ever had.

Here is the situation I found myself in:

Simple, right? I should be able to log in to the account and click a big button to leave the sub-group B Organisation. That should either delete the account and allow me to create a new personal one using the same email address, or (even better) ask me if I want to convert the now-floating account into a personal account.

But, of course, Teams is terrible.

First, I had to figure out how to leave the sub-group B Organisation. Turns out there is no way of doing so in Teams. Initially I assumed that maybe only Organisation admins could remove people, but eventually I found out that no, what you have to do instead (courtesy of a post on the Microsoft support forum) is log into an entirely unrelated site in your browser and leave the organisation through that. Also, the comment (which is, admittedly, from 2018) is now out-of-date in terms of where it says to click—for me, rather than a leave organisation link I had some guff along the lines off leave this new experience.

So, anyway, that’s hurdle #1 overcome. Next up is to see what happens if I log into my newly-detached account in Teams. On doing so, I am asked if I want to enter the sub-group B Organisation and, um, only that: 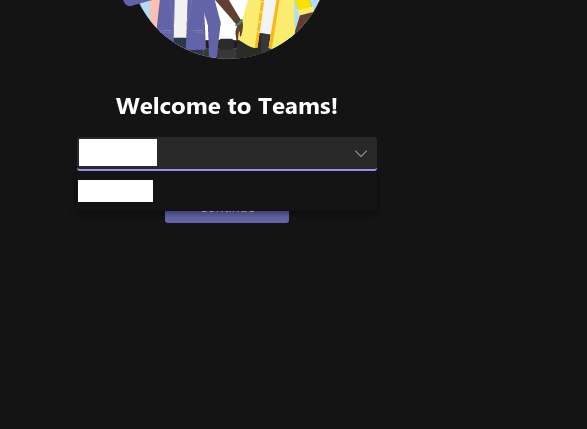 After selecting my only option, I was then helpfully informed that there was no such user existing on sub-group B’s tenancy. Exactly what I expected, but with absolutely no options to do anything about the situation; the only thing I could do was close Teams and restart it to get back to the login prompt: 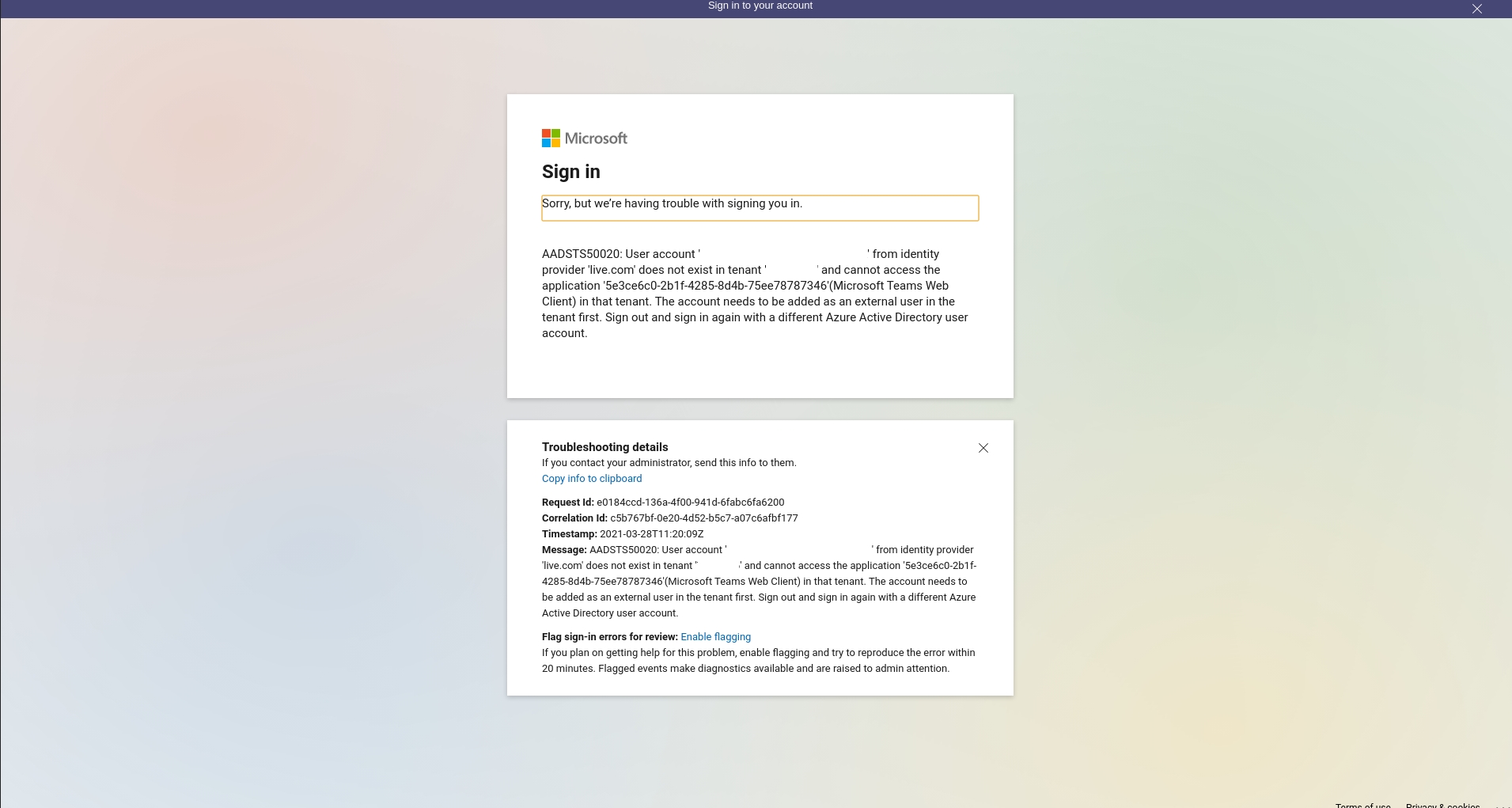 And there was absolutely nothing useful when I logged into the account on the Microsoft Web site. So okay, maybe I need to create a new, unattached account with the same email address? Nope, Teams threw up an error saying that the email address was already in use (by the account that doesn’t exist on the only place it will allow me to look for it). So that’s promising.

Maybe I can add the group A email address to my personal account? Not as far as I can tell on this horribly-laid-out menu of tiles: 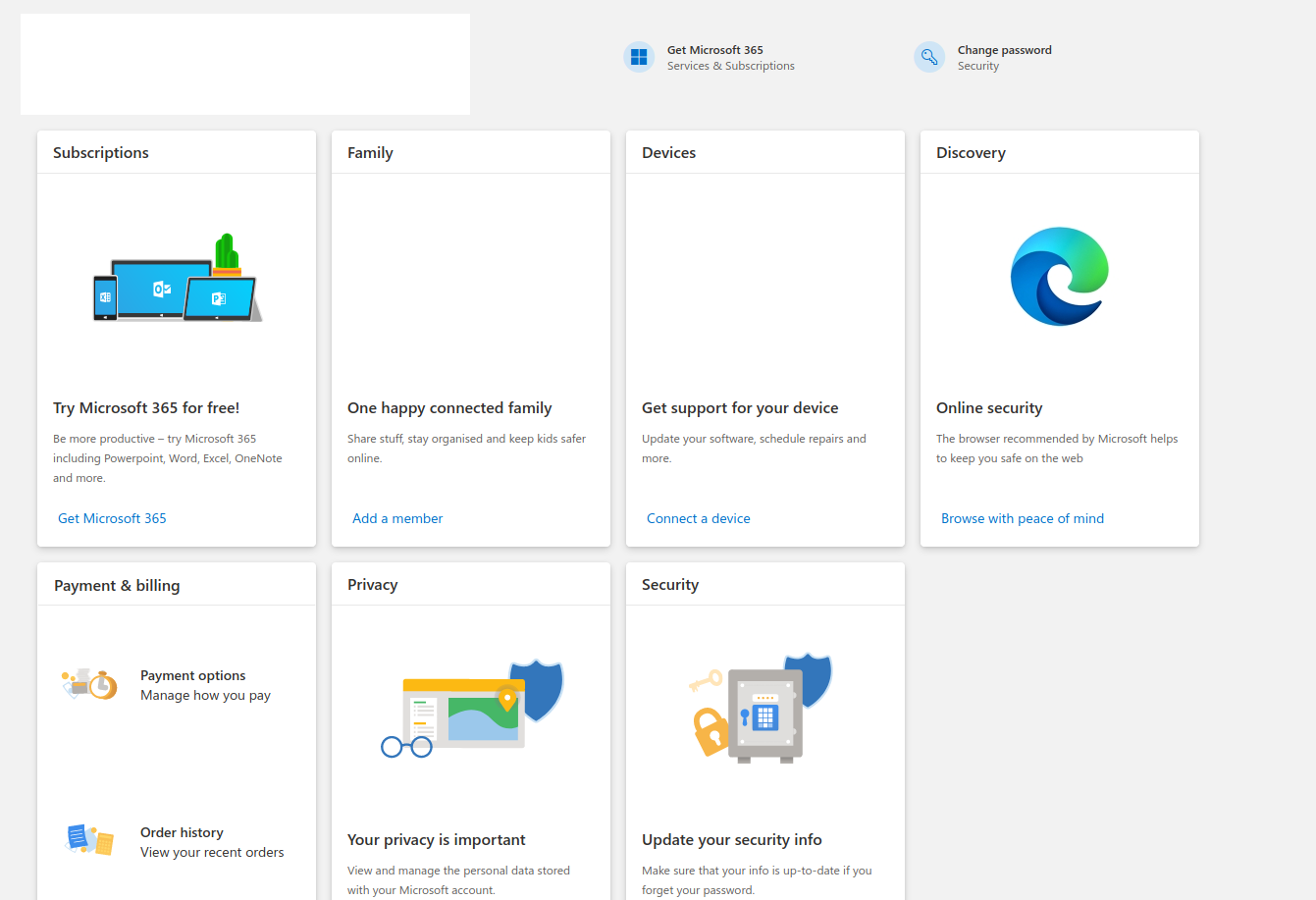 I looked into how to contact Microsoft support, but their submission form was capped at 250 words and that definitely wouldn’t be enough. I tried to set up an account on the support forum which was its own kind of painful. As a fun fact, now that I have resolved the issue (spoiler alert) I no longer need to complete the support forum account creation process, but because I’ve started it I now can’t view any threads until I do: 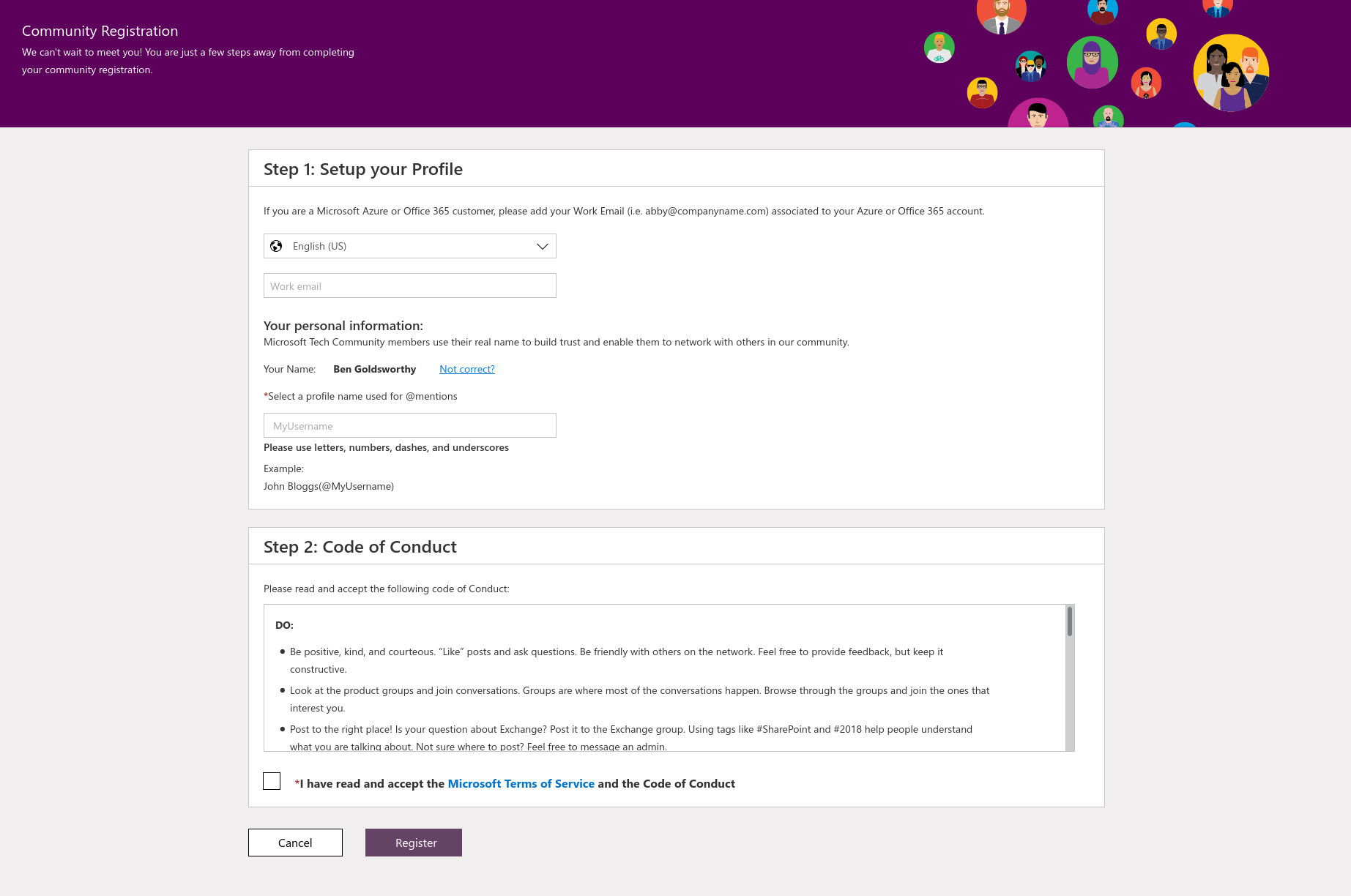 Clicking on the Cancel button at the bottom there just refreshes the page to the exact same form. Because of course it does. I’ve just signed out of my unfinished account now, but I’m sure that will bite me on the ass in the future somehow.

Anyway, back to the matter at hand. Here is how I solved the problem:

At this point, I want to pause and show you what I was prompted with when I did do:

So the invite went through, but it still had me attached to sub-group B. Moving on:

Upon joining, my group A account only had access to the bengoldsworthy.net Team (rather then the sub-group C Team I had set up). So:

So now I have both my personal and my group A accounts in my personal Organisation, each owner and sole member of their relevant Teams. All it took was two or three hours of my life (not to mention the weeks that I will have shaved off the end of it).

There’s a hot new feature out for the Android app.: the ability to block 911 calls.