The Kurds have no friends but the mountains.

Revolution in Rojava: Report Back from Civil Volunteers was a talk given at a local left-wing venue by Peter Loo, who had previously spent six months as a civil volunteer teaching in Qamishli, Rojava. Loo is a member of Plan C, an organisation looking at options for life after capitalism.

How we got here

Loo began by briefly covering what the Rojava Revolution is not—namely, that is it not some sort of wholly bottom-up Marxist-Leninist revolution and that it is not an anarchist revolution. It is, rather, the current manifestation of the four-decade long struggle for Kurdish independence, beginning with the 1978 formation of the Kurdistan Workers’ Party (PKK).

This led onto a short tour of recent history, beginning with the underground formation of the Democratic Union Party (PYD) in the early 2000s and leading up to the Syrian Civil War and 2012 split between the Kurds and the Free Syrian Army (FSA). The Rojava revolution proper began in Kobanî canton, before spreading to two others—government representatives awoke one morning, Loo said, to find the streets blocked by fighters and themselves being asked to leave, to which they showed varying degrees of compliance. Following this takeover, the PYD allied with the Movement for a Democratic Society (TEV-DEM) and President of Iraqi Kurdistan Masoud Barzani’s Kurdish National Council (ENKS).

The three cantons of Rojava—which changed its official name in 2016 to the Democratic Federation of Northern Syria in order to better emphasise the multi-ethnic nature of the new state—currently cover over 4.5 million people, or 1.5&nsbp;million more than the population of Wales.

Crucially, stated Loo, there had been no declaration of independence. The founder and philosophical leader of the Kurdish independence movement, Abdullah Öcalan, changed his mind on aspirations of statehood during his now-three-decade imprisonment in Turkey. Amusingly for a man who looks like a lost Middle-Eastern Chuckle Brother, the Turks have seen fit to imprison him alone on İmralı island with no fewer than 1,000 soldiers keeping watch.

Instead, the Kurds state that the Rojavan model is one that should be adapted and implemented by the whole of Syria (and beyond). One step in this post-Kurdish direction has been the declaration of affiliation by the Yazidis of Shengal, who were famously encircled by Daesh in 2014 and massacred or sold into slavery, until the YPG and PKK forces broke the Daesh lines and drove them out. Further, the liberation of Raqqa in 2017 had led to a huge increase in the Arab population of Rojava.

There are three central tenets to Öcalan’s theory of democratic confederalism: local democracy; feminism; and ecology. Loo accepted the ecology side of things was currently falling by the wayside as a side-effect of the ongoing conflict—although he did mention the Internationalist Commune of Rojava’s plans to plant a 50,000-tree forest—and instead chose to focus that part of his talk on the economic situation within Rojava. Aware of his audience, Loo counselled that whilst the realities of the Rojava revolution may not match with the expectations of the more radical amongst us, it is important to remember that it is taking place within an incredibly conservative society, and one that has been systemically underdeveloped and colonised by the Assad regime for decades—he illustrated this with his observation about the lack of trees in such a hot area of the word, and found that they had been cut down by the regime in the ’80s to make way for wheat. He also acknowledged that democratic confederalism must be slow to spread by its very nature, as it relies on goodwill and support to do so. Maybe this is just how revolution looks, he recalled wondering. 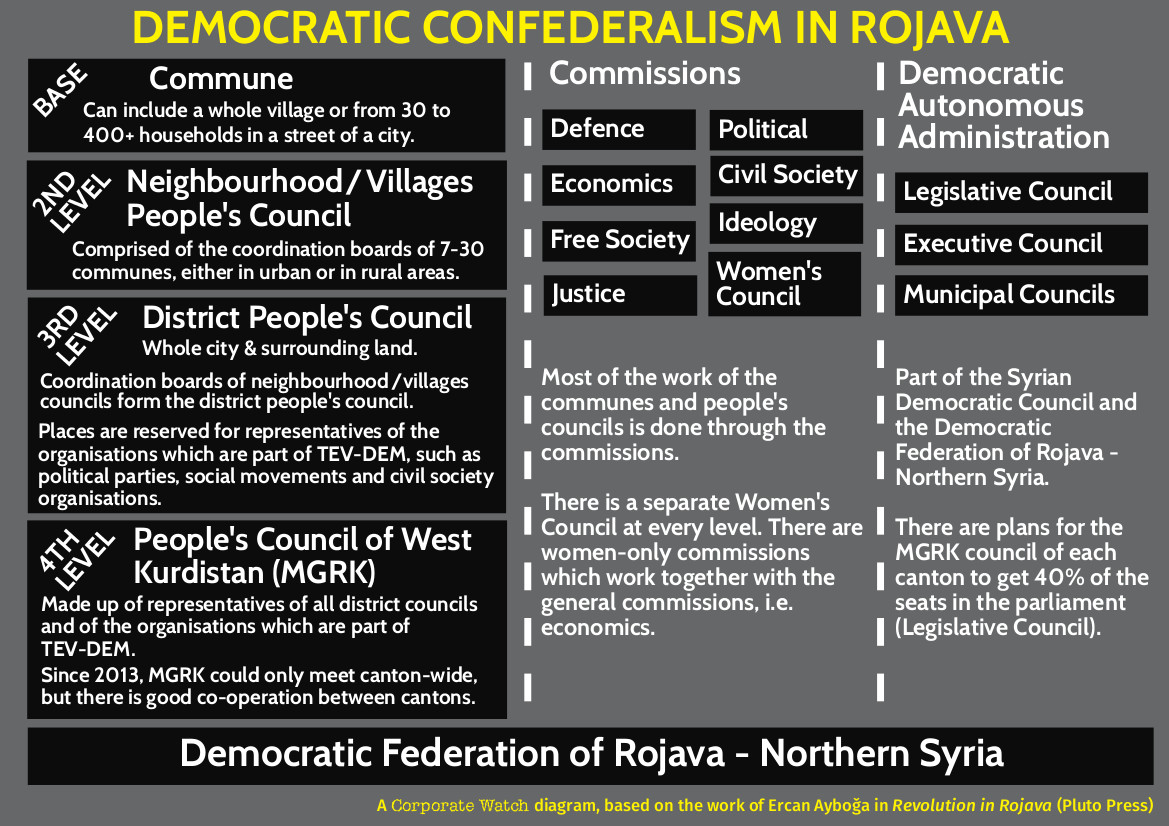 The local democracy thread is represented best by the communes, the lowest level of decision-making within Rojava. A commune comprises ~200 households. Above the communes are the neighbourhoods, followed by the districts (comprising an entire city and its surrounding lands) and, finally, the People’s Council. There are also the commissions present at each level of government, although Loo described the commune-level commissions as more like study groups.

The communes are all named after martyrs, which Loo said was emblematic of the respect afforded to them within Rojava—veneration of the martyrs serves as an important teaching and education tool. Loo described the decisions on which a commune would deliberate as encompassing low-level disputes (e.g. a parking dispute) to grander ones (e.g. deciding what to do with a captured regime bakery—it was apparently decided that even the regime’s people needed bakeries, and the building was turned over).

The communes also provide important material benefit, being the location where people can come to receive subsidised bread and oil. Someone in the audience asked who was subsidising the bread, to which Loo replied that it was the People’s Council, primarily using the profits of oil sales. Loo identified this handing-out of material goods as one of the best ways in which the revolution can build goodwill and turn the undecided over to its side.

To summarise, Loo described the three most important functions of the commune system as: decision-making; education; and providing material benefit.

Who run the world? Girls (girls)

Women’s equality (or Jineology, as developed by Öcalan) is another central pillar of the democratic confederalist ideal. Loo admitted to feeling wary of Western media portrayals of Rojava as an egalitarian wonderland when he set off, but that he was ultimately blown away at how widespread the women’s revolution is after only five years. One of the first acts of the newly-declared state was to ban the practice of polygamy. Loo was initially unsure as to why this was important, but was told by women that they no longer had to worry about their husbands taking a new wife and leaving them with the childrearing and homekeeping duties. He also commented that, since this, divorce rates have skyrocketed, which he said was great, as these women realise their husbands are scrubs and are able to move on.

Returning to the focus afforded at all levels of society to education, Loo pointed out that it would have been pointless to give women all these newfound legal freedoms without training them in what to do with them. As a result, a huge emphasis is placed on women’s education, male/female representation in the military is around 50/50, and there are Houses of Women (Mala Jin) at neighbourhood level providing 24-hour support (alongside the more general Houses of the People [Mala Gel]).

With the refocusing of the criminal justice system from retribution to restoration—Loo stated that the prisons had been largely emptied at the start of the revolution, and had yet to be refilled—an abusive husband is now liable to be sent off for a couple weeks’ education. This did slightly trigger my Orwell alarm, it must be said, but I suppose it’s preferable to the alternative. Another fun experiment is the requirement of a minimum of 40&nsbp;% male and 40 % female representation on all committees. Otherwise, said Loo, no men would have joined the committees dealing with more traditionally female concerns, such as the feminism committee.

Loo finished this section with an anecdote. At the International Women’s Day festivities, he noticed some of this students missing. When he asked one about it the next day, she said that she had had to stay behind to look after the house because her husband was so eager to go.

All is not sunshine and roses in Rojava, Loo was quick to emphasise. The fledgeling revolution is embargoed on all sides by variously-hostile foreign powers, all of whose very existence is threatened by the success and subsequent spread of revolutionary ideals on their borders. Janet Biehl has written about the three economies currently present within Rojava, and Loo further detailed them. First is the war economy—with no taxation to speak of, 80 % of the monies raised in Rojava are currently spent on the war effort(s). Secondly, the private economy. Thirdly and, Loo admitted, currently the most aspirational is the co-operative economy. Loo detailed co-operative farms that he had seen operating successfully during his time there, but accepted that there was much work to be done and it would continue to be stymied by the war for the time being.

The embargoes serve to limit the passage of items like heavy machinery into Rojava. Loo detailed a well-meaning attempt by a group of German radicals to crowdfund an ambulance and drive it from Germany to Rojava. Upon arrival, they found that the ambulance didn’t fit into the medical structures present—a Rojavan would be more likely to stick their sick relative into the back of a car and drive them down to the hospital than to call an ambulance. On top of this, a small-yet-vital mechanism broke and no replacement could be imported. The ambulance now sits, gathering dust, in a garage somewhere. Rojava, said Loo, is something of a graveyard for these sorts of well-meaning but ill-considered ideas.

Loo identified five main ways in which the revolutionary ideals were being spread. These were: ideologically, such as women seeing the improvements in their lives within Rojava; materially; through educational and empowerment; in day-to-day life, and the presence of politics in all levels of it; and legally, as in the prohibition of polygamy.1 He devoted a pair of slides to foreign volunteers, explaining that whilst the efforts and sacrifices of the likes of Holmes, Li and Hoffmann were appreciated by the Kurds, the foreign fighters could be a double-edged sword. The Marxists would come expecting to see a Marxist utopia, and lo and behold that’s what they’d see. The anarchists would come expecting to see an anarchist one, and they too would not be disappointed. Between this phenomenon and the generally short length of many foreign parties’ visits, he urged caution when getting one’s information about Rojava from radicals with Twitter accounts.

He ended on a mixed note. When the presentation had been written, the ending was more optimistic; since then, Turkey has begun its invasion of the Afrin canton as the West looks on. However, there was cause for cheer—despite having the second-largest military in NATO, the Turks have been unable to make much progress in the past couple weeks, and the window within which Turkey will have to capture Afrin is closing.