Information is like an unintelligent missile which never finds its target (nor, unfortunately, its anti-missile!), and therefore crashes anywhere or gets lost in space on an unpredictable orbit in which it eternally revolves as junk.

Jean Baudrillard’s The Gulf War Did Not Take Place collects together three articles:

At first blush, Baudrillard’s claims sound ludicrous; I mean, just look at all this war: 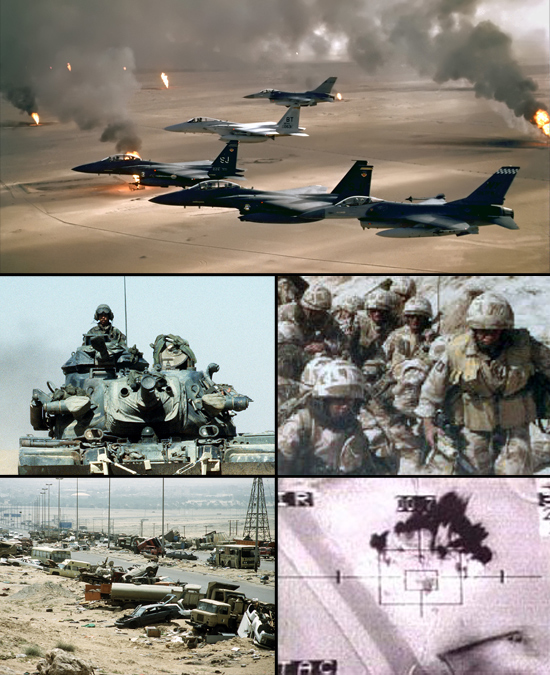 Certainly, many commentators have taken the claims at face value and dismissed them as ludicrous (and with them, the entirety of whatever postmodern project they consider Baudrillard an example of). However, I think this misunderstands Baudrillard’s real point, which relates more to definitions of war and his wider philosophy of simulacra and simulation.

The Gulf War will not take place

In the shortest of the articles, Baudrillard disagrees with the consensus that war with Iraq is inevitable. He admits the risk of doing so in a post-script, writing that [t]o demonstrate the impossibility of war just at the moment when it must take place, when the signs of its occurrence are accumulating, is a stupid gamble. That said, he believes that …it would have been even more stupid not to seize the opportunity.

Baudrillard’s argument against the possibility of war seems to hinge on the idea that whatever may happen is unlikely to fulfil anyone’s definition of what constitutes a war, even if bullets are fired and things start exploding. He argues that in a post-Cold War world, with the Western powers paralysed by [their] own strength and incapable of assuming it in the form of relations of force, war as we know it cannot possible happen. In this sense, the gravity of the non-event in the Gulf is even greater than the event of war: It corresponds to the highly toxic period which affects a rotting corpse and which can cause nausea and powerless stupor.

The build-up is unreal, he writes. It is the de-intensified state of war, that of the right to war under the green light of the UN and with an abundance of precautions and concessions. It is the bellicose equivalent of safe sex: make war like love with a condom!

The Gulf War: is it really taking place?

In January 1991, the coalition forces launch one of the largest air bombardments in history against Iraq. In February, Baudrillard questions again whether the war was really taking place. He details the symbiotic relationship between the US and Saddam, and highlights the role of the television coverage in reducing the war to unreality. Talking heads and government officials pontificate endlessly, issuing new fictions faster than the previous ones can be exposed. In lines that could just as easily apply to the current state of things on both sides of the Atlantic, Baudrillard writes the following:

Fortunately, no one will hold this expert or general or that intellectual for hire to account for the idiocies or absurdities proffered the day before, since these will be erased by those of the following day. In this manner, everyone is amnestied by the ultra-rapid succession of phony events and phony discourses. The laundering of stupidity by the escalation of stupidity which reconstitutes a sort of total innocence, namely the innocence of washed and bleached brains, stupefied not by the violence but by the sinister insignificance of the images.

However, the public are just as complicit: The public ultimately consents to be frightened, and to be gently terrorised by the bacteriological scenarios, on the basis of a kind of affective patriotism, even while it preserves a fairly profound indifference to the war. Meanwhile, thousands of Iraqis are killed away from the glare of the news cameras, unbeknownst to the Western audience who see only the clean, surgical technological war they are being shown.

This, combined with Saddam’s deceptions, reaches a nadir of unreality towards the end of the bombardment: The pilots no longer even have any targets. The Iraqis no longer even have enough decoys to cater for the incessant raids. The same target must be bombed five times. Mockery.

The Gulf War did not take place

The bombardment has stopped. The Iraqis have been ejected from Kuwait, with 25–50,000 dying at a cost of just under 300 coalition casualties (of which half were non-hostile), but otherwise nothing has changed. Baudrillard pens one final article.

The conflict was not war. Rather, it was [w]ar stripped of its passions, its phantasms, its finery, its veils, its violence, its images; war stripped bare by its technicians even, and then reclothed by them with all the artifices of electronics, as though with a second skin. He describes what has happened in terms of deterrence. Deterrence only functions well between equal forces [and, i]deally, each party should possess the same weapons before agreeing to renounce their use. For example, [i]t is…the dissemination of (atomic) weapons alone which can ensure effective global deterrence and the indefinite suspension of war. However, [t]he present politics of non-dissemination plays with fire: there will always be enough madmen to launch an archaic challenge below the level of an atomic riposte — witness Saddam.

Baudrillard ponders the implication of this notion of aperverse effect, suggesting that, [t]hings being as they are, we should place our hopes in the spread of weapons rather than in their (never respected) limitation. Comparing military deterrence to information, culture or other material and spiritual goods, he presents a maxim: Multiply vices in order to ensure the collective good.

Returning to the conflict, Baudrillard writes that he finds it …admirable that we call the Arabs and Moslems traditionalists with the same repulsion that we call someone racist, even though we live in a typically traditionalist society…. The West, he posits, is caught up in an Enlightenment traditionalism …every bit as fierce as that of any tribal religion or primitive society. It is a fundamentalism that …denounces the other as absolute Evil in exactly the same manner, yet also one that (in comparison to the other, hard traditionalism, …holds all the means to destroy the other and does not revile from their use.

Finally, Baudrillard proposes [a] variant on Clausewitz: non-war is the absence of politics pursued by other means. He describes non-war as …no longer proceed[ing] from a political will to dominate or from a vital impulsion or an antagonistic violence, but from the will to impose a general consensus by deterrence. This consensual violence can be as deadly as conflictual violence, but its aim is to overcome any hegemonic rivalry, even when cold and balanced by terror…. Baudrillard concludes with a warning:

The Gulf War is the first consensual war, the first war conducted legally and globally with a view to putting an end to war and liquidating any confrontation likely to threaten the henceforward unified system of control…The crucial stake, the decisive stake in this whole affair is the consensual reduction of Islam to the global order. Not to destroy but to domesticate it, by whatever means…Our wars thus have less to do with the confrontation of warriors than with the domestication of the refractory forces on the planet…The real stake, the challenge of Islam and behind it that of all the forms of culture refractory to the occidental world, remains intact. Nobody knows who will win. For as Hölderlin said, where danger threatens, that which saves us from it also grows. As a result, the more the hegemony of global consensus is reinforced, the greater the risk, or the chances of its collapse.