Hot off the heels of the UK Government’s announcement that they would be raising military spending whilst reducing international aid provision (and with a budget announcement expected the following week), the UK branch of the Global Campaign on Military Spending (GCOMS) hosted a briefing aimed at examining the impact of spending decisions in relation to the military and helping people to understand the scale and impact of spending, along with providing some alternative uses for such vast sums.

We began instead with Dr Kate Hudson, current General Secretary (and former Chair) of the Campaign for Nuclear Disarmament (CND). Hudson provided us with some scene-setting for the Prime Minister’s spending announcement—last Autumn, with uncertainty surrounding the possibility of new COVID-19 vaccines and a situation that looked increasingly bleak. Amid this mileu, Johnson announced an increase in the so-called defence budget of £16.5B, which would, it was claimed, herald a period of enhancement—modernisation without making any cuts—and address the new technical threats identified in the recent Strategic Defence and Security Review, through the creation of a new cyber force, a space command that aimed to be able to launch its own rockets from 2021 and a focus on AI.

This additional funding was intended to be linked to an integrated post-Brexit review of defence, but the announcement came well before the review’s publication and, Hudson said, the report appeared to have been thoroughly kicked into the long grass. The UK, the announcement was intended to demonstrate, is positioning itself as a re-emerging global power, as evidenced by its provision of an aircraft carrier in the South China Sea, but that Johnson’s fondness for robotics, AI, directed energy weapons and whatever an inexhaustible laser is will likely mean a reduction in the old mainstays like troops and tanks.

All of this, argued Hudson, is supposed to respond to the modern blurring of lines between wartime and peacetime, through hybrid warfare, cyber attacks, lawfare, etc. As she pointed out, UK military expenditure declined sharply following the end of the Cold War (whilst other European nations have remained more static). Hudson then presented the Ministry of Defence (MoD)’s reported income from its 2019 budget: 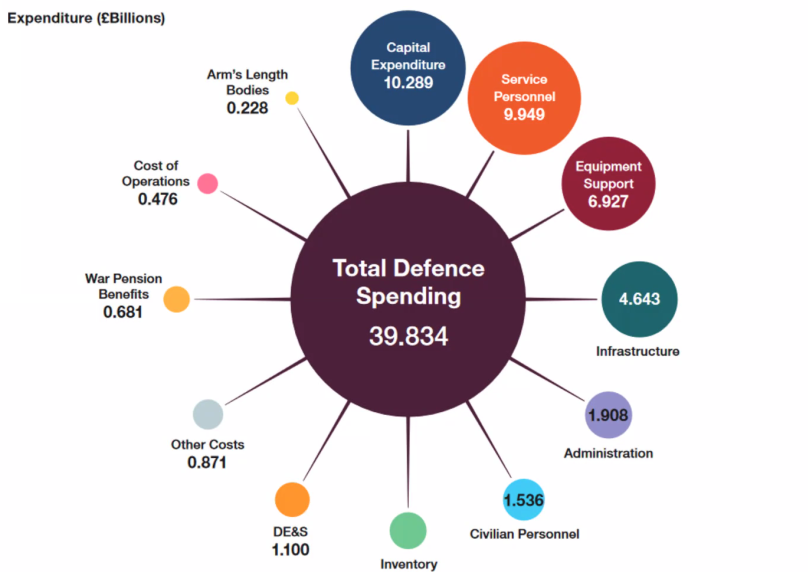 However, as others (such as SIPRI) have pointed out, the £39B reported by the MoD is markedly less than the £46.6B that they reported in military expenditure to NATO, and Hudson explained that reporting has diverged since 2012 as money has been flowed through opaque structures such as the Joint Security Fund that aren’t reported in the MoD budget.

Hudson then highlighted the 5–6 % of the MoD budget being spend on atomic weapons, with the current expenditure on the Trident programme amounting to 6 %/yr (£2.4B) and the CND having calcuated the cost of replacing Trident at £205B over the full lifetime of the project. Whilst the government maintains it is still on track within its spending limit, Hudson said, the National Audit Office (NAO) has raised concerns on the impact of the nuclear programme on the afforability of the MoD’s equipment plan (as the Trident funding comes from the MoD’s core equipment budget). She also noted that the government has not refuted the CND’s figures, and a recent House of Commons report referred readers to them as one of many cost projections (alongside the MoD’s own, which does not include decommissioning costs). As of 2019, £7B has been spent, but Hudson advised that as of 2018 we have entered the decade of maximum spend (although COVID-19 production disruptions may have impacted this).

Concluding, Hudson pointed out that there has been a long-running debate on where this funding is expected to come from, with Coalition-era George Osbourne insisting that the full costs must come from the MoD, but that there are still confusions and disagreements over this, with some arguing that capital costs should be funded in part by the Treasury, or that funds should be ring-fenced—it is apparently so confused that Gavin Williamson had at one point had to return to Parliament to correct his statement the previous day on the source of funding.

However, quoting Nick Hargreaves (the Liberal Democrats Defence Minister during the Coalition), Hudson ended by saying that this distinction was in reality a semantic matter, as it all comes out of the same pot—it is all paid by the government with money from the British taxpayer, and that we wouldn’t want it even if it was free.

Next up was Dr Stuart Parkinson, Executive Director of Scientists for Global Responsibility and a former expert witness for the Parliamentary Committee on Climate Change.

Parkinson began by comparing the projected funding for the MoD over the next four years (£24B) with that for the government’s 10-point plan for a Green Industrial Revolution (£11B). Whilst acknowledge that climate spending is harder to look at as it is not tracked in a centralised repository and one has to consider the entire economy, he pointed out that the Committe on Climate Change believed that the whole economy (i.e., government, businesses, households, etc.) is collectively spending spending about £10B this year on reducing emissions (£5B of which is coming from the government), but that the target should be for the whole economy to reach £15B and for the government to contribute at least £10B. However, Parkison said that this assumed a target of net zero by 2050, and there was in fact a strong case to be made for the necessity of net zero by

Parkinson then compared the £3B allocated for reducing carbon emissions to the (lower, budget- rather than NATO-reported) amount given to the MoD, which was £41B over the last year, as well as renewable energy research & development (£100M) to military research & development (£1.7B). He also pointed out that the government doesn’t produce its own estimates for emission reduction spend, nor for renewable R&D.

He then reviewed the measured included in the governments 10-point plan for a Green Industrial Revolution, noting that whilst there was a lot of good stuff, there was also a suspicious focus on new/advanced nuclear power whilst onshore wind and solar are not mentioned despite being the cheapest renewable energy sources. Parkinson pointed out that nuclear energy is unlikely to contribute anything to emissions reduction in the next 5 years (as the plants will have to be built first), but that having a strong civilian nuclear industry provides skills for the military nuclear sector, and that many of the relevant companies are involved in both.

Parkinson also compared job creation projections (40,000 in four years as a result of £24B in military spending and 90,000 in four years for £11B in climate spending), suggesting that according to the government’s own figures climate spending could create as many as five times as many jobs perB of investment. Finally, he examined the military’s own contribution to the climate crisis, with its carbon footprint of around 11M tonnes of CO2 (comparable with the annual use of 6M cars) and a single Trident submarine’s ability to trigger a nuclear winter. Concluding, Parkinson said that there was far more potential to tackle actual problems in a timely way whilst also creating jobs and preventing some of the problems associated with climate change by, you know, spending money on it.

Finally we heard from Deborah Burton, whose has a background in both UNESCO-backed projects in Africa and the arts who has co-founded the charity Tipping Point North South.

Burton said that there was a yawning gap between the priorities of the MoD and what people in the UK (and elsewhere) actually need to live (although she pointed out that the UK is by no means alone in this misprioritisation). With the UK a member of NATO, the G5, the G7, etc., Burton argued that it is essential for us to redirect and repurpose military spending, with conflicts around the world responsible for driving over 80 % of humanitarian need, over 50 % of the world’s poor expected to live in fragile conflict settings by 2030 and many studies showing that accelerating climate change and human-triggered ecological stressors define perfect storm for mass extinctions, with indications that the 6th mass extinction is already underway (though, on a brighter note, she did allow that nuclear extinction might get us first).

Burton cited a report release in December that pressed for the modernising of defence spending with an eye to the biggest emerging threats: pandemics and global inequality. Highlighting the cost of the F-35 fighter jet project (the single most successful programme of public wealth extraction in history) over the course of its total lifetime (~£2T), she showed that the money could have instead been spent on anything from UN disaster response for the next 400 years and global pandemic surveillance and control for the next 250 years to UN peacekeeping operations at current costs per annum for the next 444 years, amongst others. Similarly, the nuclear nine’s $73B annual expenditure on nuclear weapons could fund UN disaster risk reduction for the next 146 years, the World Health Organisation at current levels for the next 37 years and 70 % of the required annual funding for global biodiversity conservation.

Burton concluded that we have a challenge to put human safety at the forefront of defence and safety policies, and that the time has come to upend the conventional risk pyramid. The COVID-19 pandemic, she said, must be the 11th-hour wake-up call to ensure we all live long enough to see the new world, and the UK government must reverse its cuts to international aid; we must direct money towards the defence of public health and pandemic prevention.