Dr Daniel Altschuler of the University of Oxford’s Faculty of Linguistics, Philology, and Phonetics delivered a talk on his research into imaginative resistance to the DisTex research group.

Altshuler began with a famous made-up discourse by Weatherson entitled Death on the Freeway:

Jack and Jill were arguing again. This was not in itself unusual, but this time they were standing in the fast lane of I-95 having their argument. This was causing traffic to bank up a bit. It wasn’t significantly worse than normally happened around Providence, not that you could have told that from the reactions of passing motorists. They were convinced that Jack and Jill, and not the volume of traffic, were the primary causes of the slowdown. They all forgot how bad traffic normally is along there. When Craig saw that the cause of the backup had been Jack and Jill, he took a his gun out of the glovebox and shot them. People then started driving over their bodies, and while the new speed humpy caused some people to slow down a bit, mostly traffic returned to its normal speed. So Craig did the right thing, because Jack and Jill should have taken their argument somewhere else where they wouldn’t get in anyone’s way.

Assuming that everyone would intuit that the statement Craig did the right thing is false within the fiction of the story, Altshuler posed a number of questions: why? how? and why does authorial authority seem to break down in this instance, when readers are happy to allow Kafka to turn a human into a bug in Metamorphosis? In short, why do (some) readers fail to imagine that Craig did the right thing?

Questions of this nature are tackled within the philosophical literature of imaginative resistance, or an instance in which an otherwise competent imaginer finds it difficult to engage in some sort of prompted imaginative activity. Traceable as far back as Hume, the field has been particularly busy since the mid-’90s and the recent ’00s. However, Altshuler said, whilst this rich debate existed within academic philosophy, it had yet to break through into the field of linguistics in the same way.

Altshuler identified a number of proposed answers to the question of imaginative resistance. The eliminativist stance, for example, argues that the phenomenon is not attested in real literature, and that the issue is the lack of writing chops amongst the academic philsophers who discuss the topic. Altshuler then detailed various creative writing tasks he has set his students with the aim of disproving this stance, from embedding Death on the Freeway within a larger discourse such that the imaginative resistance goes away to writing their own resistance-causing stories, such as this example:

Sara never liked animals. One day, her father cautght her kicking the neighbor’s dog. He got really angry and she was grounded for a week. To get back at her father she poured bleach in the big fish tank, killing the beautiful fish that he loved so much. Good thing that she did, because he was really annoying.

Altshuler than elaborated on his own stance: that it is a mistake to discard the philsophers’ examples, and that there is a need to construct negative data in order to empirically delineate the phenomenon in order to better understand how we interpret and process fictional narrative, which will benefit writes, amongst others. Specifically, Altshuler’s research focussed on clarifying the coping strategies that readers may use in response to imaginative resistance: character report; and narrator accommodation. 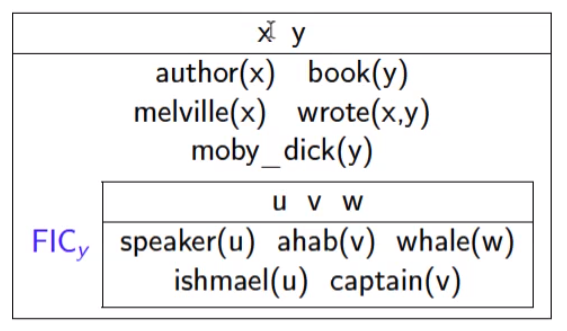 Represented in the diagram are the things at the top of our attention that we can refer back to whilst participating in a discourse, with the outer box (a.k.a. the global DRS) including metatextual information such as the author’s identidy and the fictional discourse represented under the $ FIC_y $ operation. $ FIC_y $ is a modal operator, he added, and so $ FIC_y \varphi $ is interpreted as in all worlds compatible with fiction $ y $, $ \varphi $ holds. What Altshuler wanted to know, then, was how engaging with a work of fiction (as opposed to a work of non-fiction) affects the discourse context as represented by a DRS.

Altshuler then presented a similar diagram for an example of heterodiegetic narration:

Despite there being no narrating speaker represented in this diagram, Altshuler argued that there actually is such a narrating speaker in all worlds compatible with the fiction in the form of the omniscient narrator.

He then presented the example of Partee’s missing marble:

Nine out of ten marbles are in the living room. It is in the bedroom.

This sounds wrong, and Altshuler explained that as a pronoun requires a discourse referent, applying the DRS algorithm to this case does not lead to the introduction of a discourse referent for the missing marble. Analogously, in heterodigetic narration the omniscient narrator is present in all worlds compatible with the fiction, just like the marble is there as a matter of logical necessity. However, because the DRS lacks a discourse referent, it can’t be referred to by a pronoun. This leads to accommodation through the addition of enough descriptive content, as in the following examples:

Nine out of ten marbles are in the living room. I’ve been looking for hours and…hey wait, there it is!

Nine out of ten marbles are in the living room. {The missing marble/the red one/the bloody thing} is in the bedroom.

Again, analogously, narrator accommodation is possible and may signal that a seemingly-omniscient narrator is actually unreliable and first-person-esque, which serves to introduce a discourse referent for the narrator. Altshuler described the escalating set of coping strategies employed by users in the face of imaginative resistance—perspective shift, then assuming an unreliable narrator, and finally narrator accommodation—before providing us with another story:

They flopped down beneath the giant maple. One more item to find, and yet the game seemed lost. Hang on, Sally said. It’s staring us in the face. This is a maple tree we’re under. She grabbed a five-fingered leaf. Here was the oval they needed! They ran off to claim their prize.

This was then diagrammed into a DRS, introducing us to rhetorical relations (such as $ Narration\left( \pi_1, \pi_3 \right)$):

So in this example, where a five-fingered leaf is clearly not capable of being the oval they needed, the reader can either insert an implicit She said before the latter to indicate that the statement represents the character’s delusional belief. And in One Flew Over the Cuckoo’s Nest, we are presented with an example of unreliable narratorship.

We then returned to the Death of a Fish story for a demonstration of the narrator accommodation coping strategy—in this case, we assume that the narrator who supports Sara’s fishicide is unreliable, with the result that the story world’s moral code need not be fundamentally different from our own. However, as there is no other character previously mentioned in the story to hook this narratorship onto, the reader must necessarily invent their own within the scope of the fictional discourse.

Altshuler then presented the results of a study he had run, asking laypeople to read various stories of this ilk and to answer various questions designed to elicit evidence of them having used the various coping strategies. Variations were also presented on each story, in order to identify the features that would reliably elicit certain strategies over others. Whilst only exploratory at this stage ($ n $ = 24), Altshuler reported that the results suggest that readers were really useing the hidden report and narrator accommodation strategies, though he was eager to explore this further, with long-term goals of analysiing propaganda narratives and mixed-media narratives through this lense.

There then followed a Q&A.