After an initial content warning, Koller explained what is meant by the term manosphere—a wide-ranging term for a number of distinct, but related, communities including incels, pick-up artists (PUA), male separatists (MGTOW) and men’s rights activists (MRAs). Incels, with their links to violent attacks, have garnered the most media attention in recent years, but Koller identified all of the communities as united in their legitimisation of misogyny through the adoption of red pill philosophy.

An intertextual reference to a scene from The Matrix (itself an intertextual reference to Alice in Wonderland), the philosophy proposes that one who has taken the red pill has come to realise that society is biased against men and boys and dominated by man-hating feminists. As a productive noun phrase, there is also talk of: the blue pill (i.e., the state of ignorance attested to the non-red-pilled); purple and pink pills (relating to transgenderism); and the black pill (a symbol of the incel’s sense of fatalism).

Koller introduced the MANTRaP project as interested in systemically describing the language of the manosphere and raising awareness of the discourse’s seeping into mainstream media. She also presented a selection of other research into the topic, such as an analysis of the 26 required readings of the r/TheRedPill subreddit and evidence of a migration from less-extreme manosphere communities (e.g., MRAs and PUA) to more-extreme ones (e.g., incels and MGTOW), possibly due to disillusionment. Koller also highlighted some of the group’s research that analysed the community as a whole, rather than individual communities.

To begin with, Koller presented research into the use of dehumanising metaphors in incel discourse. With a corpus of 67,000 words from 50 threads on the now-banned subreddit r/braincel (-cel being an equally versatile morpheme, in this case referring to those incels who feel their intelligence to be above-average), keyword analysis demonstrated that incels (like the manosphere in general) have a strongly hierarchical worldview, with men ranked into a range of tiers. In contrast to many other manosphere communities defined by almost comical self-aggrandisement, the incels are marked by a complete lack of self-esteem, and therefore place themselves only one rung above the bottom of their own hierarchy (above only the faggots, which Koller pointed out was not necessarily being used in a homophobic sense). 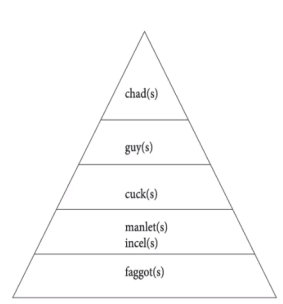 Women, similarly, are placed into a hierarchy based on their sexual market value. The incels’ male hierarchy, however, is also informed by appearance, and the communities spend almost as much time discussing male looks as females, to a degree that Koller felt bordered on the homoerotic. In short, incels construct themselves as normative at the level of the in-group, but non-normative in relation to society ideals (i.e., normies).

Koller then moved onto another aspect of the project, in which the language of the MGTOW is compared to that of lesbian separatists of the ’70s and ’80s. Undertaking a qualitative manual study of ten manifestos (five historic lesbian, five top-rated on r/MGTOW), the researchers found that there were many similarities. All argued for living a life as far removed from the opposite sex as possible, with both using absolute qualifiers to present opinion as fact and homogenise the out-group. Both exhibited a lack of modal terms and zero-sum thinking, suggesting that equality is not a mental model in either.

However, the researcher also identified differences. Both types of manifesto exhibited high levels of interdiscursivity, but the lesbian examples referenced revolutionary sources whilst the MGTOW examples were more interested in economic sources. The lesbian sources were also more communal in focus, whilst the MGTOW sources were more individualist. In short, the same textual features can evidently be used to express diametrically opposed ideologies.

Analysing consistent collocates for the four more frequent actors (women, girls, men and guys), the researchers identified a number of essentialist dichotomies applied to male and female actors prevalent within the manosphere: women and girls privileged over men and boys; violents towards male actors; and women and girls objectified and passivated in sexual contexts.

Koller concluded with a look at where the project was heading next, including a focus on the mainstreaming of manosphere discourse in the UK press and gaming communities and deradicalisation efforts.

There then followed a Q & A.