Every year, at JCR hustings, certain promises will arise from certain positions’ candidates with such regularity that we built a drinking game around it. The Welfare Officer nominees will put forward mental health awareness, the Events Officers will promise to get newer, bigger, more expensive acts in and the Media & Comms Officers will promise to

These promises usually last until the dust has settled on voting and a new officer has been chosen to spend the year failing to achieve everything they set out to do.

So I did everything I promised to do, because I’m great like that.

The first issue was what to do with Pendle College’s two websites. The College website at lancaster.ac.uk/colleges/pendle was considered the SCR’s site, and the one at pendle.lusu.co.uk the JCR’s. This makes some sort of instinctive sense — the JCR is a body within the LUSU whereas the SCR is a University construct, so it would make sense that their website hosting would be split thus.

However, in practice it wasn’t ideal. Whilst authorship may have been clear, there was no such delineation in audience. Information would be present on one site and not the other, or duplicated across both of them, with little rhyme or reason. For example, the page of information on the annual College Awards for third-year students was only present on the SCR page.

In light of the interlinked nature of the JCR and SCR, the semantics of the hosting of each and (especially importantly) the relative ranking of both for an online search of Pendle College, the only solution was to divide one site into a current students site and the other into an everyone else site. pendle.lusu.co.uk would be the former as LUSU would only hold relevance for current students, whilst lancaster.ac.uk/colleges/pendle would be the latter as it is the earlier hit for an online search, as well as non-students being more likely to search for the site via the Lancaster University website.

I used the wonderful draw.io to create sitemaps of both sites. After collecting the leaves from each graph, pendle.lusu.co.uk $ \cup $ lancaster.ac.uk/colleges/pendle produced the complete set of all pages that anyone, over the years, had considered likely to be of worth to someone, sans duplicates. Then I divvied them up into two sets. There were a couple that were arguably relevant to the audiences of both sites (e.g. Merchandise, which would be of interest to both current students and alumni), so I left these aside for the time being.

The first to tackle was the LUSU-hosted site, since it was technically the only one actually in my remit as Media & Comms Officer. I logged into the WordPress backend and like an archaeologist unearthing an ancient lost city could see the remains of hundreds of years’ worth of human activity, all amounting to nought. Countless Pages, created by countless past Media & Comms Officers, and all abandoned with nary a speck of content on them. Contact addresses that still led to Officers over half a decade gone. Photos of students for whom uni is now but a distant and hazy memory.

It all went in the bin.

The few that had actual content on had it salvaged beforehand, but many were too far gone to be saved and would have to be rewritten. After this great purge, I stuck on a couple of lorem ipsum Posts and Pages and got to work on redesigning the layout. Which is where I discovered Thesis.

All the LUSU college sites used Thesis. Now, I don’t know if it’s Thesis’ fault, or if there was some LUSU meddling that left it the state it was, but restrictive hardly does it justice. For a suite that purports to be all about empowering the designer, it was an ordeal to do anything more than change the colour scheme of the website (slightly). Considering the site features such classic infomercial lines as There’s a dirty little secret other theme companies don’t want you to know, I’m inclined to not cut it too much slack.

One email to LUSU IT Support confirmed what I’d also been worried about: whenever Thesis was bought (I suspect around 2011, judging by the publication date of this review), the login needed to access any form of support or documentation wasn’t deemed worth retaining for future use.

Basically, LUSU had lumped me with a $197 white elephant. And disabled the Add New button on the Themes page. I had clearly hit against the same wall that stopped all my predecessors, and after hours of fruitless work was about ready to give up in kind.

If at first you don’t succeed, break everything and build on the rubble.

With Thesis ditched, I spent hours playing with all the settings offered by Twenty Fourteen, tweaking the site to be just how I wanted it. The end result, I think, is something of a large step up:

Obviously, it would have been better to be able to customise more in-depth, for example getting the content to stretch right across the screen rather than leaving that unsightly blank gap on the right half of the page, but an improvement is an improvement.

To finish off, I went through my set of Pages that I’d assigned to this site and added them in one-by-one. Most of the text had to be completely rewritten, so it’s a good thing chatting shit is one of my many skills.

With what I’d learned on pendle.lusu.co.uk, this was less of a challenge. It didn’t use Thesis, just some ancient terrible Theme called Productz. Aware that using Twenty Fourteen again would yield two very similar-looking websites, I took advantage of the fact that the Add New button wasn’t disabled here and downloaded Sydney. Hours of tweaking later, and we had a fully respectable new site.

It was time again to add the Posts and Pages, and when that was finished, figure out what to do with the third set of pages. Eventually, I settled on having pages like Merchandise on pendle.lusu.co.uk, with links in the navbar of lancaster.ac.uk/colleges/pendle to them — this seemed the best compromise to avoid redundancy, which is a surefire way of leading to information decay and inconsistency.

Not too shabby, if I do say so myself

One slip of a mention into an end-of-year post later, and I was done.

Then LUSU shat the bed

As I sat, resting on my laurels, I began to hear disconcerting things through societies on whose execs I sat. LUSU were bringing in some sort of new digital system, and as a consequence all societies were being subsumed into pages within it. I inquired. What I found horrified me to my core.

It was something called NUS Digital. NUS. I shuddered: stop the ride, I want to get off. 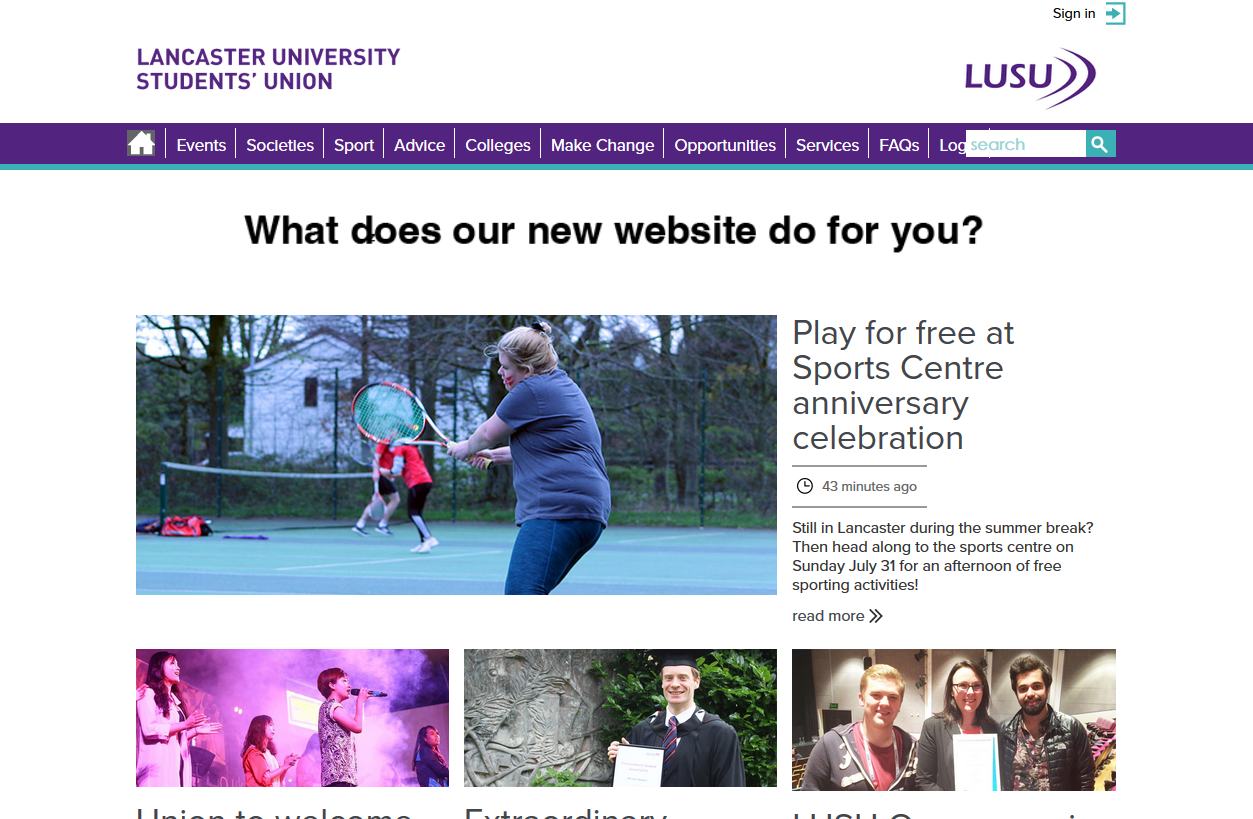 I’ve talked about the NUS in the past, but now they had moved out of just ludicrous student politicking and onto my turf. I remained optimistic, however. Maybe it’ll be good, I thought to myself. One day, I’ll learn to stop giving the NUS even the slightest modicum of credit.

Okay, so it’s a CMS only its mother could love, thought I. But maybe the colleges, being bigger than societies, will get to keep their sites. SCAN does. Again, my optimism was misplaced.

I may one day write a more about my issues with NUS Digital and their UnionCloud service, but for the time being I just had to salvage what I could of the site before it was taken down. Rushing back from T in the Park, with nary a pause to retrieve what was left of my legs from the all-covering muck, I exported everything and imported it into lancaster.ac.uk/colleges/pendle. A bit of fine-tuning and messing about and I had everything sitting smoothly in its new home — lancaster.ac.uk/colleges/pendle was now the home of everything Pendle, for everyone, be they a student prospective, current or past.

Now the uni’s going to shit the bed

I know that all Principals have been approached by the University about College websites coming into line with departmental ones…there seems to be a lot going on about that at the moment. Tell me about it, College Administrator.

I got more information from the Principal. The central University system is currently developing a more corporate Content Management System for all colleges, to be rolled out more or less immediately. Fair enough, it is the University exercising its right to market itself in the way it determines is best globally, but it’s still a bit like adopting a kid and then having them emancipated. After you’ve paid for college.

Alas, forces greater than myself had had their say and if The Wire taught me anything, it’s that the individual is powerless in the face of an establishment that has made up its mind. I exported everything from lancaster.ac.uk/colleges/pendle just in case and wrote this up so that, when the last traces of both sites have been expunged, there will be some evidence of their brief existence.

I wonder how I can break UnionCloud to look nice.